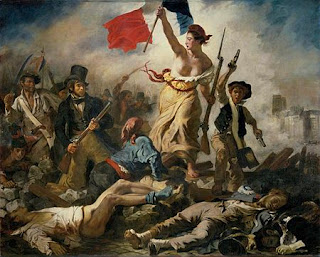 If you're like most people, you don't go around killing or assaulting others. You probably would never think of torturing, raping, kidnapping, or confining your fellow men and women. I doubt if you'd think that stealing or vandalizing their belongings would be a good thing. And I'm sure you'd never dream of stopping people from pursuing their chosen occupations.
Taking this a step further, I'll also assume you wouldn't think these actions would be fine as long as you had the endorsement of a bunch of other people, specifically, if more people expressed approval of such an actions than disapproval.

Now if all that is true, guess what: you are on your way to being a libertarian. Don't retreat from it. No, embrace your inner libertarian. It's a good thing to be. We often hear about the need to respect, tolerate, and even love humanity. That's nice but abstract. Humanity consists of individual human beings. So when you begin to make the admonition about loving humanity concrete, you can't help but start with: 1) don't murder individuals; 2) don't hit or otherwise abuse individuals, and 3) don't touch individuals' stuff without asking. You may want to go beyond those rules -- we have much to gain from peaceful cooperation, importantly including trade of all kinds -- but that is the starting point, the bare minimum. Don't tell me you love humankind if you can't endorse those rock-bottom don'ts.

Why do most of us live by those prohibitions? Most likely it's because we have a sense that this is simply the right way to be. We realize that other people are essentially like ourselves, and so we should let live because we want to live. We can take different paths to this conclusion, but most of us get there. It's not difficult to figure out. Kids do it, even if they occasionally need guidance.
Unfortunately, when the matter of the government arises, suddenly a disconnect occurs -- which is strange because the government is just a group of people. It's not an entity but an institution, a group of people who relate to one another and to a larger population in an ongoing and more-or-less formally defined way.

But if a government is just people, we ought to expect the don'ts set out above to apply, no? Many people, alas, don't see this. (Government education is largely to blame.) They exempt from those rules anyone thought to be acting in an "official capacity." But why? And shouldn't the burden of proof be on those who advocate a double standard of morality, one for the ruled and another for the rulers?

Don't reply that democracy makes it all right. We've already seen that you and I wouldn't abuse someone else if we could muster the support of a lot of people. Why would the situation differ if people formally voted?

You may be thinking that "officials" can do things to other people that you and I may not do because government exists to protect us. Fair enough. Let's talk about defense, self and otherwise.
You may properly use proportional force against someone if necessary to protect yourself or other innocents against aggression. Not only that: you may hire others to protect you or band together with others for mutual defense and aid of other kinds. Nothing wrong with that.

But note: those whom you engage for such a purpose are still subject to the rules the rest of us follow. They may not, under the rubric of defense, commit offenses against innocent people. If they do, they ought to be treated as any of the rest of us would and should be.

Obviously, the individuals who comprise the government are not held to this standard. They routinely use force against people without even the pretense of protection of innocents. Take taxation. If you, having threatened or hurt no one, don't surrender the money the people who comprise the government demand, they will not take no for an answer. If you decline, they will send armed agents to seize your belongings and maybe even lock you up in a cage. Should you resist those armed agents, they may kill you with impunity for "resisting a lawful arrest."

You and I can't treat other people that way. Wherefore the double standard? Needless to say, the power to tax is the root of all other government power, which some people then grab to gain wealth that would be impossible to obtain through voluntary exchange.

Once you explicitly grasp the implicit rules you already live by, you are a long way toward being a libertarian. All that's left is for you to realize that those rules apply to everyone, even those who shroud themselves in the mantle and mystique of the state.

TGIF -- The Goal Is Freedom -- appears occasionally on Fridays.

Posted by Sheldon Richman at 4:40 AM

It Tears me Up Whenever we receive complaints from People About Their Experience With the Hackers They Met Before They Heard about us.
These Days There Are alot of Hackers Online, You Just Have to Be Careful about who you meet for help, because many people now don't really know who to ask for help anymore but there is an actual solution to that which I am giving you for free, Trust Me You Don't Wanna go out there seeking for Hackers Yourself, Because the probability of getting a Real Hacker Out there Is Very Slim . ❌❌ ❌ Most Of Them are actually not who they say they're, they are just out there to Rip people Off, Trust Me You Don’t Wanna Risk It. You Can Always Identify Them With Their False Advertisements and False Testimonies Trying To Lure you Into their Arms, And most of them use yahoomails, gmails and other cheap email providers which could easily expose their vulnerabilities, Please Don’t Fall For Them🚷 Come To Think Of It, Why would a Legit Hacker Be using a gmail or a cheap email provider that exposes his vulnerabilities????⚠️⚠️⚠️
Well, Our Purpose Here Is To Link You Up With Top Notched Legit Hackers With Great Online Reputations and Impressive LinkedIn Profiles That’ll Blow Your Mind. Trust Me, You Don’t Wanna Miss This Great Opportunity.

🔥 ☑️ COMPOSITE CYBER SECURITY SPECIALISTS are the Answers to your PRAYERS . We are here to Provide you with The BEST and FASTEST Hackers that would get your Job Done as Fast as possible. 🔥 🔥


☑️All our Specialists are well experienced in their various niches with Great Skills, Technical Hacking Strategies And Positive Online Reputations And Recommendations🔘
They hail from a proven track record and have cracked even the toughest of barriers to intrude and capture all relevant data needed by our Clients. 🔥 🔥

We have Digital Forensic Specialists⚡️, Certified Ethical Hackers⚡️, Software Engineers⚡️, Cyber Security Experts⚡️, Private investigators and more⚡️⚡️. Our Goal is to make your digital life secure, safe and hassle free by Linking you Up With these great Professionals such as JACK CABLE, ARNE SWINNEN, SEAN MELIA, DAWID CZAGAN, BEN SADEGHIPOUR And More. These Professionals are Well Reserved Professionals who are always ready to Handle your job with great energy and swift response so that your problems can be solved very quickly.
All You Need to Do is to send us a mail and we’ll Assign any of these specialists to Handle your Job immediately. ⚡️⚡️⚡️

✅ COMPOSITE CYBER SECURITY SPECIALISTS are Basically the ANSWERS to your PRAYERS. Trust Me, You Don’t Wanna Miss Out This Great Experience.