Glenn Greenwald has heroically exposed the latest trivialization of the charge of anti-Semitism. (His other posts are here and here.) These days one is likely to be hit with that ugly charge – or the perhaps uglier one of being a “self-hating Jew” – merely for doubting that Iran is developing a nuclear weapon or is an “existential threat” to Israel. (Guilty!)

Needless to say, if the epithet “anti-Semite” is going to be used in such a patently ridiculous way, it will have little force when applied to the real thing. Why are the “Israel-firsters” so short-sighted?

That term – “Israel-firster” – has drawn a good deal of attention from those who lightly throw around the anti-Semitism charge in order to silence criticism of Israel and the Israel lobby, but it’s not at the heart of the issue. (An Israel-firster is not someone who says, “Israel right or wrong” but rather one who says, “Israel can’t be wrong.”) Criticism itself of Israel and the lobby is the real target. The campaign to silence the critics would have been no less intense had that term never been used – and in fact writers who have never called anyone an Israel-firster are nonetheless accused of anti-Semitism (or of dangerously skirting it).

Yet it’s hard to see what’s objectionable about the label “Israel-firster” when, as Greenwald points out, some of the most prominent American backers of Israel essentially call themselves the same thing. Greenwald writes:

Let’s start with Haim Saban, the Hollywood mogul who, among other things, lavishly funds the Democratic Party, as well as the center at the Brookings Institution bearing his name where pro-Iraq-War and Iran-adversary Kenneth Pollack is a “senior fellow”; this is what Saban told The New York Times (which described him as “the most politically connected mogul in Hollywood, throwing his weight and money around Washington and, increasingly, the world, trying to influence all things Israeli”):

I’m a one-issue guy and my issue is Israel.

Then there’s Sheldon Adelson, Newt Gingrich’s financier. Amazingly, you can read and hear reports about Adelson and his Las Vegas casino megafortune that never mention Israel or that he publishes a pro-Likud newspaper there. Yet NBC quoted Adelson saying:

All we care about is being good Zionists, being good citizens of Israel, because even though I am not Israeli born, Israel is in my heart.

Gingrich, by the way, took a more moderate line on the Palestinians (whom he now says were only recently “invented”) before he met Adelson. If there’s one thing worse than a demagogue, it’s a demagogue for sale.

If Saban and Adelson are willing to say such things openly – which is their perfect right to do – what is the problem with criticizing them or using the term “Israel-firster”?

Clearly, the point is to intimidate the critics of Israel and the Israel lobby, which – let us not forget – are working overtime to provoke a war against Iran.

Update: This is the first time I’ve used the term “Israel-firster.” My reason for not using it is the same as Corey Robin’s, namely, “not because it questions the patriotism of American Jews but because it partakes of the vocabulary of patriotism in the first place, a vocabulary I find suspect and noxious from beginning to end.”

Posted by Sheldon Richman at 9:52 AM 3 comments 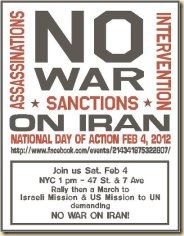 See my op-ed: “Stopping the Rush to War against Iran”
Posted by Sheldon Richman at 6:52 AM 0 comments

To Whom It May Concern:

Your January 3, 2012 post, “Lest We Forget, Iraq’s Horrific Body Count” offers a final toll for the Iraq “War” (honestly, an illegal invasion and occupation) as 162,000, 79% civilian, from Iraq Body Count. This figure is horrific enough, but it is not even close to the results of accurate surveys. Iraq Body Count is a non-scientific tabulation of the dead. Accurate studies were done, published in the Lancet journal in 2004 and 2006. The estimated number of dead in 2004--more than seven years ago--was 98,000. The estimated number of dead in 2006—more than five years ago—was 654,965, and this calculation excluded the slaughters in the city of Fallujah. The British polling agency ORB put the figure at over 1,000,000 in 2007. That was more than four years ago, and the figure has only grown since then. As for using the qualifier of “civilian,” when we invade a nation that poses no threat to us; that is, when we commit the supreme crime against humanity, ALL of our victims are innocent. The very least we can do to respect the dead is acknowledge how many there are to the best of our ability. Please publish a correction.

Posted by Sheldon Richman at 6:12 AM 0 comments

Labels: Iraq
Email ThisBlogThis!Share to TwitterShare to FacebookShare to Pinterest

The point is that any enlargement [of the State], good or bad, reduces the scope of individual responsibility, and thus retards and cripples the education which can be a product of nothing but the free exercise of moral judgment. Like the discipline of the army, again, any such enlargement, good or bad, depraves this education into a mere routine of mechanical assent. The profound instinct against being ‘done for our own good’ . . . is wholly sound. Men are aware of the need of this moral experience as a condition of growth, and they are aware, too, that anything tending to ease it off from them, even for their own good, is to be profoundly distrusted. The practical reason for freedom, then, is that freedom seems to be the only condition under which any kind of substantial moral fibre can be developed.

Posted by Sheldon Richman at 9:36 AM 0 comments

No War, No Sanctions, No Intervention, No Assassinations

No War on Iran: National Day of Action: Saturday, February 4
Posted by Sheldon Richman at 8:00 AM 2 comments

TGIF: The Internet Dodges the SOPA Bullet – for Now

Op-Ed: A Fitting Symbol of the American Empire

Posted by Sheldon Richman at 7:44 AM 0 comments

Posted by Sheldon Richman at 7:38 AM 0 comments

The Rejection of Palestinian Self-Determination 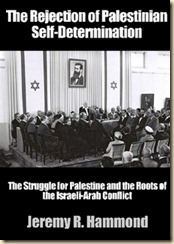 Jeremy Hammond has written an excellent brief book on the origin of the strife in Palestine. This is the book (available for the Kindle) to read or recommend for anyone who wants to know what’s going on in Palestine but who isn’t prepared to spend her life reading about the matter.

Posted by Sheldon Richman at 6:49 AM 1 comments

Obama and the GOP

Republicans hate Obama. But, then, it's said that one most hates those like oneself.

Posted by Sheldon Richman at 6:44 AM 1 comments

Labels: Republicans
Email ThisBlogThis!Share to TwitterShare to FacebookShare to Pinterest

No Bain, No Pain?

I submit that judging Bain Capital through the fog of corporate statism is not easy. But a general suspicion is probably in order.

Posted by Sheldon Richman at 6:43 AM 0 comments

Wise Beyond His Years

[T]he term “Israeli/Palestinian Conflict” [is] no more accurate than calling the Civil Rights Movement the “Caucasian/ African-American Conflict.” In both cases, the expression was a blatant euphemism: it gave the impression that this was a dispute among equals and that both held an equal share of the blame. However, in both, there was clearly an oppressor and an oppressed, and I felt horrified at the realization that I was by nature on the side of the oppressors.

--Jesse Lieberfeld,  11th -grader in Pennysylvania
"Fighting a Forbidden Battle: How I Stopped Covering Up for a Hidden Wrong"
Posted by Sheldon Richman at 5:00 PM 0 comments

Posted by Sheldon Richman at 7:26 AM 2 comments

Posted by Sheldon Richman at 6:27 AM 0 comments

SOPA and PIPA – Learn More
Posted by Sheldon Richman at 6:14 AM 1 comments

What Israel Really Fears about Iran

A nuclear Iran could make it tougher for Israel to act against enemies closer to home, a senior Israeli military official said Tuesday, suggesting that regional fallout would be broad should Tehran achieve bomb making capabilities.

In other words, Israeli leaders don’t fear an attack. (Others have already said this, and American neocons agree.) Rather they fear that a nuclear Iran could deter Israel from asserting its will in the region. Hezbollah is a “threat” only if Israel again invades Lebanon. Hamas would cease being a threat if the Palestinians in Gaza and the West Bank (and Israel itself) were treated justly.

All of this presumes Iran is working toward acquiring a nuclear weapon (Israel has about 200), but to – to repeat—there is no evidence of this.

Posted by Sheldon Richman at 6:13 AM 1 comments

This Is a Libertarian Argument?

Some libertarian minarchists reject libertarian anarchism on the grounds that a few people would get away with crimes or with not paying their debts. I don’t think this is true. The minarchists underrate the power of entrepreneurship and mutual aid to solve important problems. (And it’s not as if people don’t routinely get away with crimes, torts, and contract violations under any political system.)

But even if the minarchists were right, what kind of argument is that for a libertarian to deliver? It says that to make sure no escapes justice we should accept a monopoly law-enforcer sustained by aggressive force. I thought libertarians didn’t believe that good ends justify aggression. ("The principle that the end justifies the means is in individualist ethics regarded as the denial of all morals. In collectivist ethics it becomes necessarily the supreme rule." -- F. A. Hayek)


Why didn’t Danny DeVito win an Oscar for this excellent movie?
Posted by Sheldon Richman at 5:13 PM 1 comments

The private-equity controversy raging around Mitt Romney is complicated in part because of corporatist interventions. But it misses the point to say, as some have, that Bain Capital wasn't trying to create jobs; rather it was trying to make money for its investors. For that just raises the question: How does one make money for investors? Theoretically the answer is: ultimately by creating value for consumers. That could require reducing the use of labor and resources in one line of production in order to free them for another line in which consumers have a more intense demand. We live in a world of scarcity.

Of course, I’ve only scratched the surface.

You might get punished for urinating on corpses, but if you order or commit torture on live prisoners, have no fear. There will be no legal consequences.

Miko Peled, son of the late Israeli Defense Force General and subsequent peace activist Mattiyahu Peled, has written a hard-hitting essay on the long-standing relationship between Israel and the Palestinians,  “Ethnic cleansing is what drives Israel’s policy towards Palestinians.” I strongly recommend it.

Miko Peled’s book, The General’s Son, is about to be published.

A Land without a People?

Posted by Sheldon Richman at 6:17 AM 4 comments