TGIF: The Consequences of Liberty

What if we suspended disbelief and supposed that free markets could reasonably be expected to impoverish most people while benefiting only the few?

Read it here.
Posted by Sheldon Richman at 10:10 AM 0 comments

The American Sniper Is No Hero

Despite what some people think, hero is not a synonym forcompetent government-hired killer.

If Clint Eastwood’s record-breaking movie, American Sniper, launches a frank public conversation about war and heroism, the great director will have performed a badly needed service for the country and the world.

Read it here.
Posted by Sheldon Richman at 11:04 AM 3 comments

TGIF: What Are Libertarians Out to Accomplish?

When I was researching my recent article on Nathaniel Branden, who died last month, I came across an audio file of a talk Branden gave at the 1979 Libertarian Party national convention in Los Angeles....

[T]he talk, “What Happens When the Libertarian Movement Begins to Succeed?,” is remarkable in more than one respect....

Read it here.
Posted by Sheldon Richman at 9:13 AM 1 comments

We can identify two kinds of economic inequality, and let’s keep this in mind as we contemplate what, if anything, government ought to do.

Read it here.
Posted by Sheldon Richman at 9:10 AM 0 comments

The Open Society and Its Worst Enemies

Last week’s bloody events in Paris demonstrate yet again that a noninterventionist foreign policy, far from being a luxury, is an urgent necessity — literally a matter of life and death. A government that repeatedly wages wars of aggression — the most extreme form of extremism — endangers the society it ostensibly protects by gratuitously making enemies, some of whom will seek revenge against those who tolerate, finance, and symbolize that government and its policies.

Read it here.
Posted by Sheldon Richman at 6:30 AM 0 comments

The French Commitment to Free Expression

"France Arrests A Comedian for His Facebook Comments, Showing The Sham of The West’s 'Free Speech' Celebration," by Glenn Greenwald

"The Propaganda War: The Horror of the Paris Rally," by Arthur Silber

Posted by Sheldon Richman at 8:08 AM 0 comments

Contrary to American officialdom and its stalwart “manufacturers of consent” — the intelligentsia and mainstream media — we will never comprehend the reasons for the slaughter of 17 innocent people in Paris as long as we ignore the history of Western violence against the Muslim world.

Read it here.
Posted by Sheldon Richman at 12:52 PM 0 comments

I don't know what to make of people who seriously think that mocking both the powerful and powerless shows their even-handedness.
Posted by Sheldon Richman at 8:52 AM 0 comments

Yes, there is no right not to be offended. But that doesn't mean there is a corollary obligation to offend.

Recommended reading: "Why I Am Not Charlie," by Scott Long;  "Trolls and Martyrdom: Je Ne Suis Pas Charlie," by Arthur Chu; and "In Solidarity with a Free Press: Some More Blasphemous Cartoons," by Glenn Greenwald.
Posted by Sheldon Richman at 7:54 AM 3 comments

TGIF: In Memory of the Charlie Hebdo Victims

Words can hardly convey the grief and disgust felt at Wednesday’s executions of the editor, cartoonists, and others — 10 people in all — at France’s satirical weekly newspaper, Charlie Hebdo. Two policemen also were killed, and 11 other people were wounded by the three fanatics who reportedly declared they were avenging the prophet Muhammad, founder of Islam.

Nothing can justify attacks on people whose only offense lay in their use of words and drawings to mock religion and politics. Charlie Hebdo freely satirized all three Abrahamic religions, as well as politicians of various stripes. No source of power was immune from the cartoonists’ and writer’s pens — which is not to imply that had Islam been the newspaper’s only target, the murders would have been less monstrous.

Read it here.
Posted by Sheldon Richman at 6:07 AM 0 comments 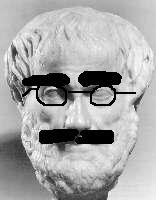 Let's grow up. It's long past time.
Posted by Sheldon Richman at 1:25 PM 0 comments

Labels: Islam
Email ThisBlogThis!Share to TwitterShare to FacebookShare to Pinterest

The Ominous Republican Hold on Congress

As we face the new year, the biggest concern for peace lovers is Republican control of the U.S. Senate. While Republican votes don’t reach the key number 60, members of the GOP will still be in a strong position to push their belligerent global agenda.

I don’t mean to overstate the danger. After all, the Democrats were hardly better. But those who abhor war will awaken each day knowing that hawkish Sens. John McCain, Lindsey Graham, Ted Cruz, and their ilk are in control.

Read it here.
Posted by Sheldon Richman at 11:36 AM 0 comments

One can see the future America in its treatment of the Indians. Will Grigg summarizes that history in gory detail in "Bryan Fischer and the Gospel of Genocide." Highly recommended.

HT: Gary Chartier
Posted by Sheldon Richman at 9:43 AM 0 comments