In fairness to Ludwig von Mises (whom Michael Lind uses, cynically and dishonestly, as example of libertarian softness on fascism; see post below), you have to look at the historical moment he was writing about. Mises understood that the choice in Italy was between Mussolini and the Leninists. In real terms, there was no third choice at that point. He did not accept the Fascist program in the least and condemned its inherent violence. But in the short run he thought it was better to keep the Leninists from imposing their monstrous regime. He made a choice between two forms of totalitarianism, and took what he saw as the lesser. (Given what was going on in the Soviet Union, was he wrong? It was an abattoir in which entire classes of people were being exterminated.) Liberalism was not an option.

Postscript: There is a big difference between what Mises wrote and any nice words Hayek and Friedman may have had for Pinochet and his economic program. Mises had nothing good to say about Mussolini's program, nor did he have hopes that autocracy could usher in free markets. Lind shamefully lumped all three together.
Posted by Sheldon Richman at 11:42 AM 0 comments

Michael Lind writes at Salon.com: “Having denounced liberals as crypto communists for half a century during the Cold War, the American right now routinely accuses the center-left of being fascist.” Lind goes on to wonder why “American conservatives and libertarians” have avoided discussion of their own “heroes” who seem to have been soft on fascists. He specifically mentions Ludwig von Mises’s remarks about the Italian Fascists in the 1920s (in his book Liberalism) and F. A. Hayek’s and Milton Friedman’s alleged approval of Augusto Pinochet’s “free market” dictatorship in Chile.

The first thing I want to say is that by putting libertarianism on the right and linking it with conservatism, Lind indicates that his knowledge of the libertarian movement is rather superficial. Philosophically the differences are too fundamental to permit such a mistake in a conscientious observer. If libertarianism belongs anywhere, it is on the left.

Lind’s article contains much to comment on, but here I want to make just one or two points. Even if Mises, Hayek, and Friedman really approved of fascist regimes (one can disagree with them while maintaining that things aren’t quite so simple), it would take more than that to indict libertarianism. Lind never explains why this alleged record doesn’t merely reflect on the particular named individuals who for one reason or another departed from their stated libertarian principles.

After all, what is there in libertarianism that would incline an adherent to feel the least sympathy for fascist dictators? Certainly nothing obvious.

The closest Lind gets to answering that question is his pointing out that libertarians dislike democracy, the implication being that one who dislikes democracy necessarily likes autocracy. That’s a strange argument indeed, as Roderick Long points out here. As Long writes, “[L]ibertarians don’t oppose democracy (in the conventional sense) because they hanker after autocracy; they oppose democracy because it is too much like autocracy.” Mises agreed: "There is really no essential difference between the unlimited power of the democratic state and the unlimited power of the autocrat" (Socialism, 1922).

Lind commits a major gaffe by taking democracy at face value; it seems not to have occurred to him that democracy might not be exactly what it is purported to be. Indeed, it has long been argued that a façade of majoritarianism typically masks a form of aristocracy, or minority rule. The historian Edmund Morgan refers to this as the fiction of representation. I discuss Morgan’s thesis here.

Had Lind not swallowed the civics-book hype and understood that democracy is not actually rule by the people, he might have sized libertarianism up differently.

Only individuals value, choose, and act, of course, but in an important sense the resulting social whole is greater than the sum of its individual parts. Thus the defense of personal liberty is the defense of society. Let’s hear our opponents criticize that.

While inflation hawks understandably keep a close watch on the Federal Reserve’s money-creation activities, an equally worrisome Fed activity is taking place right under their noses. Under cover of addressing the financial crisis and recession, the Fed has become the central allocator of credit.

As San Jose State University economics professor Jeffrey Rogers Hummel points out in The Independent Review (Spring 2011), Fed chairman Ben Bernanke “has so expanded the Fed’s discretionary actions beyond merely controlling the money stock that it has become a gigantic, financial central planner.... [T]he Fed that emerged from the crisis is no longer the same as the Fed before the crisis.”

Posted by Sheldon Richman at 11:13 AM 0 comments

Hey, I neglected to post my two latest offerings, both of which show my favorite cable talking head is full of baloney:

"TGIF: Progressive Intolerance" scolds Chris Matthews for pretending that those of us who reject Keynesian economics hate science.

"Conservatives Don't Hate Government" is an op-ed that debunks Matthews's absurd claim about conservatives by showing how committed they are to using government for all kinds of things.

I really should stop watching Hardball.
Posted by Sheldon Richman at 8:00 PM 1 comments

Media message to candidates: It's okay to oppose government spending and debt, but if you oppose war and empire, we'll marginalize the crap out of you.
Posted by Sheldon Richman at 10:18 AM 0 comments 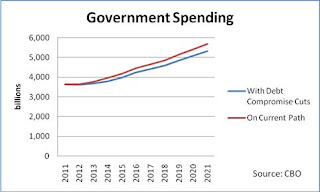 HT: John Stossel
Posted by Sheldon Richman at 9:32 AM 0 comments

Op-Ed: Politicians in a Panic

You can almost see the panic on their faces. The politicians, central bankers, and court economists seem to be thrashing around like bad swimmers caught in a riptide. Despite all attempts — stimulus spending, increased borrowing, the Fed Reserve’s low-interest-rate policy, presidential jaw-boning — the economy refuses to recover. Unemployment remains over 9 percent, investment is stagnant, and even the previous paltry growth is fading. People increasingly see the government as impotent.

If it weren’t for the innocent victims, this would be satisfyingly entertaining. After all, these are the reputed best and brightest, who assured us they know how to fix and run an economy. Now they are at wits’ end, and they’re running out of time.

Read the full op-ed, "Politicians in a Panic," here.

Posted by Sheldon Richman at 9:27 AM 0 comments

At FEE’s Advanced Austrian Economics Seminar last week, more than one speaker mentioned that Ludwig von Mises considered a different title for the book we know as Human Action. The other title? Social Cooperation.

Read all of TGIF: Social Cooperation here.
Posted by Sheldon Richman at 9:23 AM 0 comments

Unless you want world government, you're already an anarchist. We're just haggling over the level.
Published with Blogger-droid v1.7.4
Posted by Sheldon Richman at 5:20 PM 2 comments

Labels: anarchy
Email ThisBlogThis!Share to TwitterShare to FacebookShare to Pinterest

Days of Infamy 66 Years Ago

There isn't much to be said about those unspeakable atrocities that hasn't been said many times before. The U.S. government never needed atomic bombs to commit mass murder. Its "conventional" weapons have been potent enough. (See the firebombing of Tokyo.) But considering how the "leaders" saw The Bomb, its two uses against Japan stand out as especially heinous acts. The U.S. government may not have used atomic weapons since 1945, but it has not yet given up mass murder as a political/military tactic. Presidential candidates are still expected to say that, with respect to nuclear weapons, "no options are off the table."

Posted by Sheldon Richman at 11:45 AM 0 comments

Labels: anarchy
Email ThisBlogThis!Share to TwitterShare to FacebookShare to Pinterest

There are worse things in the world than fear of lending to the US government. Here's one: eagerness to lend.
Published with Blogger-droid v1.7.4
Posted by Sheldon Richman at 8:08 AM 1 comments

Op-Ed: A Cheer and a Half for the Tea Party.

Were it not for the Tea Party, the debt-ceiling controversy might never have taken place. Kudos on that count alone.

The rest of the op-ed, "A Cheer and a Half for the Tea Party," is here.
Posted by Sheldon Richman at 11:30 AM 1 comments

Since the sky is now apparently the limit, I rechristen the debt ceiling “the debt sky.” But seriously — no, that was serious.

The rest of TGIF: The Debt Sky is here.
Posted by Sheldon Richman at 11:29 AM 0 comments