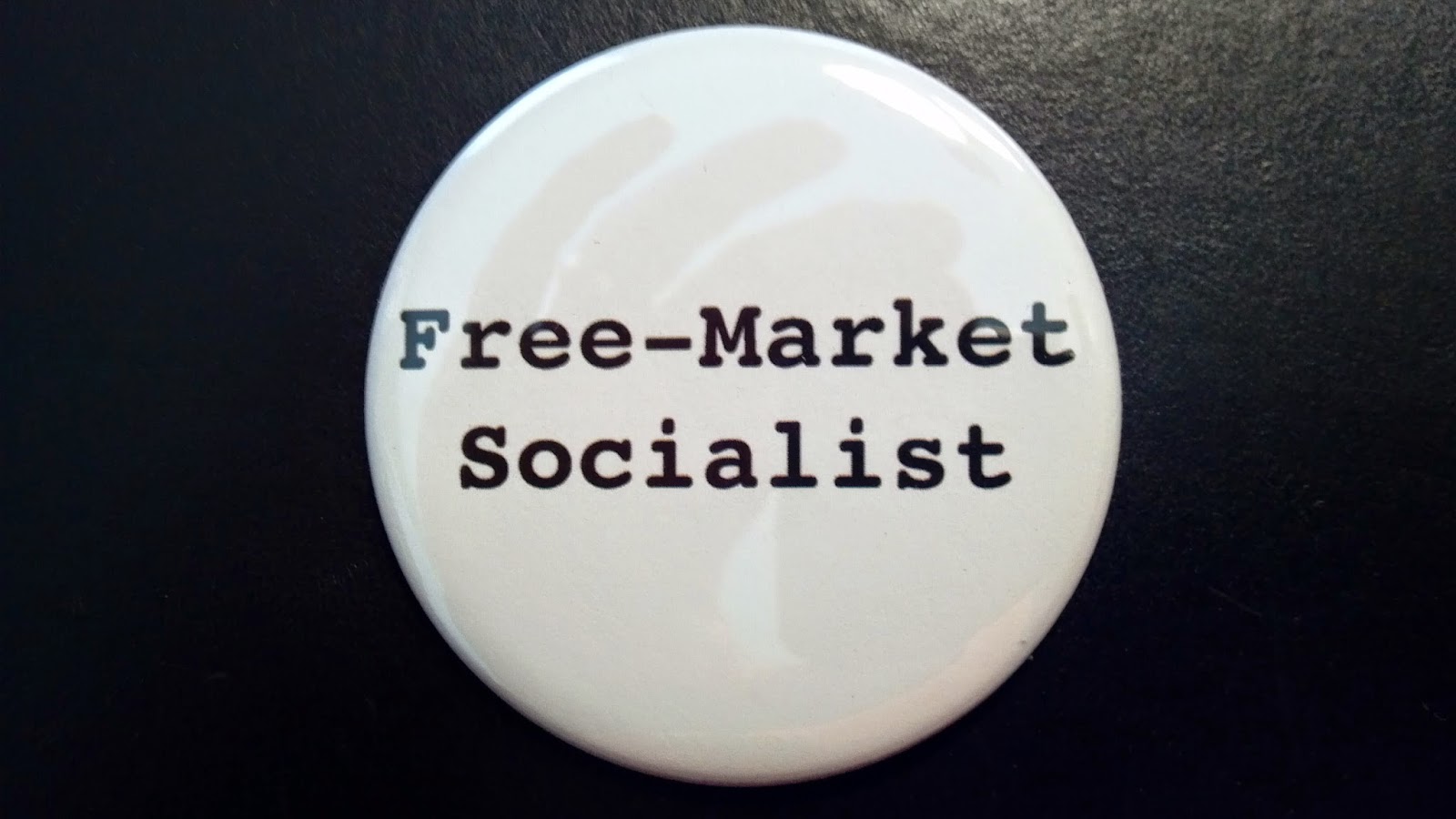 Some people have a hard time seeing how a libertarian could call himself or herself a socialist. I understand the confusion. But in the late 19th and early 20th centuries, this was far less a mystery. In market anarchist Benjamin Tucker's day, socialism was more an umbrella term than it is today. It essentially included anyone who thought the reigning political economy -- which they called capitalism (and saw as a system of state privilege for the employer class) -- denied workers the full product they would have been earning in some alternative system. The Tuckerite socialists' alternative was full laissez faire -- without patents, tariffs, government-backed money/banking, government land control, etc. The collectivist socialists had some nonmarket system in mind. The point is that socialism was more a negative statement -- against capitalism -- than a unified positive agenda on behalf of a specific alternative system.

Some might say that the common element for all these variants of socialism was a belief in the labor theory of value. But it may be more precise to say that the comment element was more general: namely, that workers were cheated by the reigning system. That need not commit one to the labor theory. (On the relationship between cost of production and price in Austrian economics, see my "Value, Cost, Marginal Utility, and Böhm-Bawerk.") In fact, Austrian economics contains an implicit exploitation theory, which was made explicit by Eugen von Böhm-Bawerk. As I wrote in "Austrian Exploitation Theory":


Böhm-Bawerk was merely applying the more general exploitation theory held by free-market thinkers at least back to Adam Smith: Monopolies and oligopolies (suppressed competition) harm consumers and workers through higher prices and lower wages. For Smith monopoly was essentially the result of government privilege. This largely has been the view of later Austrians, also.

This should be uncontroversial. In the corporate state, government privilege restricts competition among employers in a variety of ways and -- just as important, if not more so -- forecloses or raises the cost of self-employment and other alternatives to traditional wage labor. So worker bargaining power is reduced. The difference between what workers would have made in a freed market and what they actually make represents systemic exploitation.

I'm not saying that libertarians should call themselves socialists today. That would not communicate well. But this semantic history has its value.

The late Chalmers Johnson, the great analyst of the American empire, warned that if Americans didn’t give up the empire, they would come to live under it.

We’ve had many reasons to take his warning seriously; indeed, several important thinkers have furnished sound theoretical and empirical evidence for the proposition. Now come two scholars who advance our understanding of how an interventionist foreign policy eventually comes home. If libertarians needed further grounds for acknowledging that a distinctive libertarian foreign policy exists, here it is.

Read it here.
Posted by Sheldon Richman at 11:45 AM 0 comments

Will American Ground Troops Be Sent to Fight ISIS?

With the United States dropping bombs on yet another Muslim country, we might benefit from a close look at President Obama’s anti–Islamic State strategy.

Obama and his spokespeople are always quick to make two points: first, that no American ground forces will be sent into combat against the Islamic State in Iraq and Syria (ISIS), and second, that the United States will merely be part, albeit a leading part, of a broad coalition of Arab and NATO countries.

Read it here.
Posted by Sheldon Richman at 7:21 AM 1 comments

With the United States on the verge of another war in the Middle East — or is it merely the continuation of a decades-long war? — we libertarians need to reacquaint ourselves with our intellectual heritage of peace, antimilitarism, and anti-imperialism. This rich heritage is too often overlooked and frequently not appreciated at all. That is tragic.

Libertarianism, to say the least, is deeply skeptical of state power. Of course, then, it follows that libertarianism must be skeptical of the state’s power to make war — to kill and destroy in other lands. Along with its domestic police authority, this is the state’s most dangerous power. (In 1901 a libertarian, Frederic Passy, a friend of libertarian economist Gustave de Molinari, shared in the first Nobel Peace Prize.)

Herbert Spencer, the great English libertarian philosopher of the late 19th and early 20th century, eloquently expressed radical liberalism’s antipathy to war and militarism. His writings are full of warnings about the dangers of war and conquest.

TGIF is here.
Posted by Sheldon Richman at 8:10 AM 0 comments

Calling President Obama's ISIS plan a "counterterrorism operation" is a lie to pacify the American public. ISIS is not a terrorist group (though it's capable using terrorism as a tactic.). It's a nonstate conquering army that is taking and holding territory in order to build a formal state.

P.S.: If Obama really thought ISIS presented a significant threat to Americans at home, would he rule out sending ground troops?
Posted by Sheldon Richman at 12:18 PM 0 comments

Is the Foreign-Policy Elite Clueless?

The American foreign-policy elite seems to have no idea what it’s doing.
Americans may believe the government — especially the foreign-policy side — is at least minimally competent, but when one surveys decisions from the last few decades, one has to wonder.

The current crop of policymakers, like earlier ones, know what they want to do: make the world safe for American leadership — or, less euphemistically, American hegemony: No rivals for American influence or access to resources and markets can be tolerated. As

President George H.W. Bush said, “What we say goes.”
Even by that standard, the policy architects and executors look incompetent — or unbelievably cynical.

Read the full op-ed here.
Posted by Sheldon Richman at 8:19 AM 1 comments

Like many libertarians, I’ve learned a lot from Murray Rothbard on a wide variety of subjects. Of course, no one gets everything right, especially someone as intellectually ambitious, multidisciplinary, and prolific as Rothbard. Nevertheless, reading the work of the man who left such a mark on the modern libertarian movement is as profitable as it is pleasurable.

While rereading For a New Liberty (first published in 1973) recently, I confess I was puzzled, which is not the frame of mind Rothbard normally leaves me in. In deriving property rights, he used the example of a “sculptor fashioning a work of art out of clay and other materials.”

Read TGIF here.
Posted by Sheldon Richman at 8:16 AM 7 comments

Ten Lessons, Plus One, We Should Learn from 9/11

1. Killing one or many innocents, regardless of one's grievances, is monstrous. This elementary principle would seem to apply to George Bush, and now Barack Obama, as much as to the late Osama bin Laden and now Abu Bakr al-Baghdadi and his ilk. Can someone say why it doesn't?

2. Despite all its guarantees -- contrary to its ideological justification for existing -- the state can't protect us -- even from a ragtag group of hijackers. Trillions of dollars spent over many years built a "national security apparatus" that could not stop attacks on the two most prominent buildings in the most prominent city in the country -- or its own headquarters. That says a lot. No. That says it all. The state is a fraud. We have been duped.

3. The shameless state will stop at nothing to keep people's support by scaring the hell out of them. (Robert Higgs writes about this.) That people have taken its claims about "why they hate us" seriously after 9/11 shows what the government's schools and the mass media are capable of doing to people. But the people are not absolved of responsibility: They could think their way out of this if they cared to make the effort.

4. Blowback is real. Foreign-policy-makers never think how their decisions will harm Americans, much less others. They never wonder how their actions will look to their targets and those who suffer "collateral damage." That's because they are state employees.

5. As Randolph Bourne said, getting into a war is like riding a wild elephant. You may think you are in control -- you may believe your objectives and only your objectives are what count. If so, you are deluded. Consider the tens of thousands of dead and maimed Iraqis and Afghanis (and dead Pakistanis and Yemenis and Somalis and Libyans). What did they have to do with 9/11?

6. No one likes an occupying power.

7. Victims of foreign intervention don't forget, even if the perpetrators and their subjects do.

8. Terrorism is not an enemy. It's a tactic, one used by many different kinds of people in causes of varying moral hues, often against far stronger imperial powers. Declaring all those people one's enemy is criminally reckless. But it's a damn good way for a government to achieve potentially total power over its subjects.

9. They say the enemy of my enemy is my friend. Maybe, maybe not. But it seems abundantly clear that the enemy of my friend is also likely to be my enemy. See the U.S.-Israel relationship for details.

10. Assume "your" government is lying.

11. Politicians will stop at nothing to shamelessly exploit the memory of the American victims of blowback if it will aggrandize their power. No amount of national self-pity, self-congratulation, and vaunting is ever enough.

In a startling article, Daniel McCarthy, the admirable editor of The American Conservative magazine (TAC), writes, “Successive British and American empires created and upheld the world order in which [classical] liberalism could flourish.” In other words, as he writes in “Why Liberalism Means Empire,” “Liberalism and empire reinforced one another in manifold ways.” Therefore, if we want an enduring liberal democratic society, we must acknowledge the necessity of a U.S.-enforced global empire.

Read all of TGIF here.
Posted by Sheldon Richman at 8:57 AM 0 comments

Let's Have Candor from the NATO Summit

Don’t hold your breath, but it would be refreshing if NATO leaders meeting in Wales this week spoke candidly for once about Ukraine.

Read it here.
Posted by Sheldon Richman at 7:33 AM 0 comments