From the Jerry Seinfeld episode "The Limo," in which George Costanza and Jerry Seinfeld misrepresent themselves to get a free limo ride from the airport, not realizing that the people they are impersonating are leaders of the Aryan Union:


George ("O'Brien"), talking to an assistant: Tim, who's the head of the Aryan Union, you or me?

George: And who's responsible for making hate mongering and fascism popular again?

George: Good. I think you forgot something.

George: Good. Now get out.

Video clips of Trump and Clinton shouting accusations at each other, building to a horrifying crescendo. Johnson appears and says:


This is how people desperate for power behave. I don't want power because I think you should run your own life. That's why I will shrink the government and free the economy. I won't give you anything, but I will get the government out of your way so you can live peaceful and prosperous lives. Maybe I'm the outsider, but I thought that was the point of America. You in?

Posted by Sheldon Richman at 8:00 AM 0 comments

Trump Supports Legal Status, But Not Amnesty, for "Illegals"

“When I use a word,” Trump said, in rather a scornful tone, “it means just what I choose it to mean—neither more nor less.” (With apologies to Lewis Carroll)
Posted by Sheldon Richman at 10:21 AM 0 comments

How to Deal with a Non-Violent Bigot

My article "How to Deal with a Non-Violent Bigot" has been published at Learn Liberty (IHS). In it I discuss the "alt-right's" repugnant response to the excesses of "political correctness" and my view of the proper libertarian perspective on bigotry.
Posted by Sheldon Richman at 10:31 AM 7 comments


America’s Counter-Revolution, dedicated “To the constitutionalists of all parties,” gives new meaning to the word pithy. In 20 short chapters (most of which were previously columns in the Freeman and elsewhere) Sheldon Richman achieves a remarkable thematic coherence, giving the reader a nice window into American constitutional argument and thus into American history.

Building on Arthur E. Ekirch’s Decline of American Liberalism (1955), Richman concludes that the Federalists gave America a vague constitution having the appearance of limited powers but marred by implied ones: a “living constitution” for conservative nationalists. The Federalists, recall, set imperial greatness above liberty and thought real limits on power “impossible”; so-called Anti-Federalists opposed the rule of self-nominated aristocrats and believed in dispersed power.

Posted by Sheldon Richman at 9:35 AM 0 comments

National Regulation of Amusement Parks Is Not What's Missing

The potential danger of amusement parks is not that they face state rather than national regulation. It's that people have been lulled by government chimerical guarantees per se. A false sense of security is worse than no sense of security at all. The best assurance would be produced by market competition along the safety dimension.
Posted by Sheldon Richman at 3:47 PM 0 comments

Is the Government's Budget Equal to GDP?

The more you think about the notion that tax cuts must be paid for, the more ridiculous it sounds. One might say tax cuts have have to be made up for (by cutting spending), because the government would have less revenue, but not paid for. Moreover, since taxpayers pay for everything government does (sooner or later), the conventional wisdom about paying for tax cuts translates to: How should the taxpayers pay for their tax cuts? To which the only proper answer is: Huh? Say what?

From the taxpayers' vantage, tax cuts cost nothing. We might say they cost the politicians, bureaucrats, and government contractors something--but it's something they had no right to anyway. Securing my wallet "costs" a would-be thief my money. But who cares?

Final point: a hidden premise of this belief is that the government properly owns all wealth and income. In budget-talk when the government gives you a chance to recover or hold onto some of your money, say, via a tax deduction or credit, that is known as a "tax expenditure"; in other words, it's just another way for government to spend (its) money. But under that way of thinking it follows that not taking the money in the first place is also a tax expenditure. What's the difference between, on the one hand, taking money and giving some back and, on the other, not taking the full amount to begin with? Thus the whole GDP must be the government's budget because the politicians, as they see things, "spend" all of it one way or another.

This is pretty absurd. So let's just acknowledge that what you honestly earn is yours and that the government is a thief because taxation is theft.

71th Anniversary of the A-bombing of Hiroshima and Nagasaki 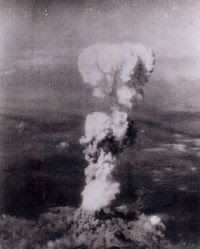 Today marks the 71st anniversary of U.S. President Harry Truman's atomic bombing of Hiroshima, Japan. The atomic bombing of Nagasaki took place three days later in 1945. Some 90,000-166,000 individuals were killed in Hiroshima. The Nagasaki bombing killed 39,000-80,000 human beings. (It has come to my attention that the U.S. military bombed Tokyo on Aug. 14--after destroying Hiroshima and Nagasaki and after Emperor Hirohito expressed his readiness to surrender.)


There isn't much to be said about those unspeakable atrocities against civilians that hasn't been said many times before. The U.S. government never needed atomic bombs to commit mass murder, but it dropped them anyway. (Remember this when judging the official U.S. moralistic stance toward Iran.) Its "conventional" weapons have been potent enough. (See the earlier firebombing of Tokyo.) Nor did it need the bombs to persuade Japan to surrender; the Japanese government had been suing for peace. The U.S. government may not have used atomic weapons since 1945, but it has not yet given up mass murder as a political/military tactic. Presidents and presidential candidates are still expected to say that, with respect to nuclear weapons, "no options are off the table."

Mario Rizzo has pointed out that Americans were upset by the murder of 3,000 people on 9/11 yet seem not to be bothered that "their" government murdered many more Japanese civilians in two days. Many more died as a consequence of the bombings.  Conservatives, ironically, were among the earliest critics of Truman's mass murder. It's also worth noting that the top military leaders of the day opposed the use of atomic bombs.

Some people still see the A-bombs as the only alternative to invasion, which would have cost many more civilian lives. Now there's the fallacy of the false alternative in dying color. Why couldn't the U.S. military have called it a day and gone home? Why the assumption that the state must destroy and conquer its "enemy"? Why demand unconditional surrender? (To back up a step, why go to war against Japan at all? Pearl Harbor was the result of systematic, intentional provocation -- as Herbert Hoover and others pointed out at the time) -- perhaps with Roosevelt's foreknowledge. A government less concerned with a rival for its and its allies' colonial possessions might have not gotten involved.)

Other things to read: Anthony Gregory’s “Hiroshima, Nagasaki, and the US Terror State,”  David Henderson’s “Remembering Hiroshima,”  G.E.M. Anscombe's "Mr. Truman's Decree," and my own "Truman, A-bombs, and the Killing of Innocents."

[A version of this post appeared previously.]
Posted by Sheldon Richman at 9:18 AM 1 comments

Cohen Nails it on Putin and Trump

Posted by Sheldon Richman at 10:32 AM 0 comments

Pmurt Gets It Backward

Trump says we need more work and fewer cheap imports. Boy does he have that backward! As the old British Liberal Party used to say, "Money Buys More under Free Trade." 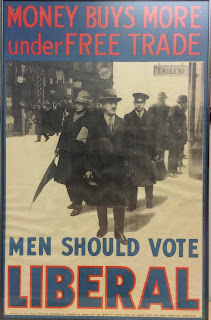 A Flaw in the Limited-Government Case

A flaw in the limited-government advocate's brief against statelessness is the overlooked fact that the state is not a homogeneous blob. It is a group of individuals who cooperate to accomplish certain ends (for good or ill). No superstate compels their cooperation. That is, they exist in a state of anarchy with respect to one another. In other words, widespread, decisive cooperation goes on everyday without state supervision or enforcement. QED.

Limited-government advocates thus reify the state as much as other statists do.

Another way of putting my point: the minarchist's goverment is un-praxeological. The state does not seem to consist of individuals who need reasons (incentives) to act in the ways the minarchist assumes. Rather it's as if the state were a single acting entity that conducts itself appropriately. Why? Because it has no other choice under its constitution.

This assumes away all the interesting problems -- e.g., why do armed people (police, soldiers) carry out the orders of unarmed people (dictators, kings, presidents, prime ministers)?

You can see this argument more fully developed in the last chapter of America's Counter-Revolution: The Constitution Revisited.
Posted by Sheldon Richman at 10:44 AM 0 comments