If you want to see how inhumane people can be, just watch those who make and execute foreign policy. We could spend all day discussing the cruelties that politicians and bureaucrats commit against people who live inside the United States. Think how many are caged like wild animals because they manufacture, sell, or consume disapproved substances; gamble where government has forbade it; traded sexual services for money; possessed a gun they weren't "supposed" to possess; etc. ad infinitum. Naturally, America leads the world in locking up people.

Read more »
Posted by Sheldon Richman at 11:18 AM 5 comments

Posted by Sheldon Richman at 11:46 AM 0 comments 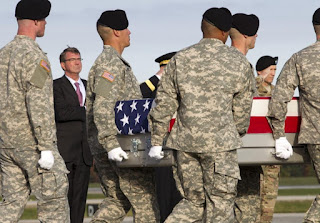 In the great 1964 antiwar film, The Americanization of Emily, the protagonist, Charlie Madison (James Garner), says what Americans desperately need to learn:


We perpetuate war by exalting its sacrifices.

If government played by the same rules as the rest of us, it would cease to be government.
Posted by Sheldon Richman at 10:04 AM 3 comments

Labels: government, the state
Email ThisBlogThis!Share to TwitterShare to FacebookShare to Pinterest

TGIF: Gun Control and Immigration Restrictions Are Enemies of Liberty

Donald Trump's indictment of the Bush II administration for failing to prevent the 9/11 attacks presents an opportunity for more of a bird's eye view of American foreign policy in the Middle East, a policy that has killed many hundreds of thousands, maimed countless more, and laid waste to entire societies.

The racist murders last summer of nine Emanuel AME parishioners in Charleston, S.C., would never have happened if only that United States had a better-funded, more efficient, and stricter background-check system for handgun buyers. Dylann Roof could never have obtained a .45-caliber pistol had an FBI examiner seen his arrest record for misdemeanor drug possession and if gun dealers could not go ahead with a sale when the FBI could not complete its background check in three days.

The victims would be alive today -- or so we’re told. But would they be? The same question must be asked of subsequent shootings as well, but the the Roof case is particularly interesting because of its racial motivation.

Read more »
Posted by Sheldon Richman at 11:41 AM 4 comments

The good news about the presidential election season is that so many voters seem disgusted with career politicians. The bad news is that these voters are naively opting for "outsiders" who in reality are just politicians in another form. They are anti-politician politicians.

This, I submit, is not progress.

Republican foreign policy: We're bombing you because what we say goes.

Democratic foreign policy: We're bombing you because we want to protect you from bad things.

Posted by Sheldon Richman at 10:49 AM 1 comments

These are hard times for us advocates of peace and free markets. As the 2016 presidential campaign heats up, where can we turn -- assuming we must turn somewhere? Neither Republicans nor Democrats have much to offer voters who both favor free markets and agree with James Madison (not someone I'm usually fond of quoting) that “of all the enemies to public liberty war is, perhaps, the most to be dreaded, because it comprises and develops the germ of every other.”

Read more »
Posted by Sheldon Richman at 9:14 AM 3 comments

Realism and Utopianism in the Gun Debate

After an atrocity like the shootings at Umpqua Community College in Roseburg, Oregon, what’s needed is hard-headed realism, not pie-in-the-sky utopianism. Unfortunately we always get more of the latter than the former.

The most consistent wing of the war party would have a permanent US military occupation of (at least) Afghanistan, Iraq, Libya, Syria, and Iran.
Posted by Sheldon Richman at 10:48 AM 0 comments

What passes for thinking about the prevention of gun violence is not thinking at all. Thinking (as problem-solving) is a search for means that can be reasonably expected to achieve a given end. By reasonably I mean that supporting arguments can be provided to demonstrate to the satisfaction of reasonable people the connection between the means and ends. What we get from gun-control advocates is nothing like that; instead they operate on the magical belief that uttering certain words -- codifying just the right incantation -- will accomplish the end.

The controversy raging over Planned Parenthood is one of the most acrimonious public discussions in recent memory. While the immediate issue concerns the disposition of fetal tissue after abortion (pregnant women can have tissue donated for medical research), the controversy taps into the more basic, and highly charged, conflict between defenders of women's reproductive rights -- the right to choose an abortion -- and defenders of unborn children's right to life. But my purpose here is not to settle that conflict.

Read more »
Posted by Sheldon Richman at 11:26 AM 5 comments