A Better Way to Safety

Assuming everything the Bush administration says about al Qaeda is true, what's a better way for us to keep safe: a plodding, bumbling, centralized monster bureaucracy led by devious unaccountable politicians, or a decentralized, entrepreneurial network of organizations whose existence depends on satisfying customers who can take their business elsewhere anytime?
Posted by Sheldon Richman at 5:38 AM 0 comments

Labels: terrorism, the state, war on terror
Email ThisBlogThis!Share to TwitterShare to FacebookShare to Pinterest 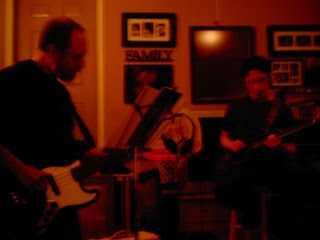 This is the first known photograph of the new band The Rockingham Whigs. The band is shown here playing at a clandestine studio somewhere in the south-central U.S. As you can tell, this picture was taken with a hidden cellphone camera and is not an official release. This is exclusive to Free Association. Check back here for news of more sightings.

Posted by Sheldon Richman at 5:36 AM 1 comments

We appear to live in a republic. But look closely; it’s clearer every day that we live in a de facto autocracy. President Bush has managed to amass an astounding amount of power simply by scaring the American people and Congress into thinking that our continued existence as a society depends on giving him carte blanche.

The rest of my op-ed, Autocracy Comes to America," is at The Future of Freedom website.
Posted by Sheldon Richman at 7:41 AM 1 comments

Labels: neoconservatives, terrorism, the state
Email ThisBlogThis!Share to TwitterShare to FacebookShare to Pinterest

All public policies are related. Okay, that may be a slight overstatement, but there's a point here. A politician's credibility on one public issue -- and thus the disposition of that issue -- will often be determined by his or her position on other issues. People will look at a politician's full program as a way of judging good faith. Case in point: the Bush administration's announcement that it will limit the states' ability to extend medical coverage through the State Children's Health Insurance Program (SCHIP) to families that do not qualify for poverty programs because they make too much money.

The rest of this week's "TGIF, Bad Policy Drives Out Good," is at the Foundation for Economic Education website.
Posted by Sheldon Richman at 9:21 AM 0 comments

Such Are the People Who "Govern" Us

Broad new surveillance powers approved by Congress this month could allow the Bush administration to conduct spy operations that go well beyond wiretapping to include — without court approval — certain types of physical searches on American soil and the collection of Americans’ business records, Democratic Congressional officials and other experts said.

Administration officials acknowledged that they had heard such concerns from Democrats in Congress recently, and that there was a continuing debate over the meaning of the legislative language. But they said the Democrats were simply raising theoretical questions based on a harsh interpretation of the legislation....

The dispute illustrates how lawmakers, in a frenetic, end-of-session scramble, passed legislation they may not have fully understood and may have given the administration more surveillance powers than it sought. [Emphasis added.]

They were rushing off to vacation, by the way. Remember this the next time someone rhapsodizes about democracy public service, and all the other "of the people, by the people, for the people" shit.
Posted by Sheldon Richman at 8:24 AM 1 comments

Labels: civil liberties, the state, war on terror
Email ThisBlogThis!Share to TwitterShare to FacebookShare to Pinterest

What About the Iraqi and Afghan Dead?

The Washington Post yesterday devoted some of its pages to photos of the 4,100 U.S. troops killed in Iraq and Afghanistan. I suppose it was some kind of statement.

A better statement would have been pictures of the Iraqi and Afghan dead. But there are well over half a million of them and pictures aren't readily available. So we can just forget about them.

But something bothers me about this. Oh, yes, the Americans could have refused to go to Iraq. They might have gone to the brig as a result of their choice--life's a bitch sometimes--but it was a choice. The Iraqis had little choice in the matter. The U.S. invaded them. (Many have fled their country, but that's a big step to take.)
Posted by Sheldon Richman at 10:34 AM 2 comments

The Natural Right of Property

Thomas Hodgskin (1787-1869), the English economics writer I discussed last week, is an enigma -- until his philosophy is seen in its entirety. He was an editor at The Economist of London from 1846 to 1855, during the period author Scott Gordon called "the high tide of laissez faire," yet he is considered a Ricardian socialist, was "quoted and deferred to by Marx [and] described by Sidney and Beatrice Webb as Marx's master." How could any libertarian claim Hodgskin as a mentor?

The rest of this week's TGIF, "The Natural Right of Property," is at the Foundation for Economic Education website.
Posted by Sheldon Richman at 7:50 AM 0 comments

I was interviewed by Todd Andrew Barnett's Liberty Cap Talk Live on BlogTalkRadio. The topic is foreign policy. You can listen to it here.
Posted by Sheldon Richman at 5:55 AM 5 comments

The opponents of the Bush wars and the accompanying expansion of government power have been disappointed countless times before. Just the other day the Democrats in Congress acquiesced in the Bush administration’s heavy-handed bid for the power to conduct warrantless eavesdropping on American citizens and residents in the name of fighting terrorism.

We’ve come to expect Democratic cave-ins by now, but I confess I was disheartened to hear the presidential aspirant Sen. Barack Obama say he would invade Pakistan if he knew Osama bin Laden was there and President Pervez Musharraf of Pakistan did nothing. Although Obama opposed the invasion of Iraq from the start, he evidently missed a key argument against that folly, for it would apply to the invasion of Pakistan too, namely: the U.S. government cannot throw its military might around the Muslim world without making things far worse than they are.

The rest of my op-ed, "Casual Talk of War," is at The Future of Freedom Foundation website.
Posted by Sheldon Richman at 5:07 AM 2 comments

Real Liberalism and the Law of Nature; Winning Is Losing

This week's TGIF, "Real Liberalism and the Law of Nature," is online at the Foundation for Economic Education website.

My op-ed "Winning Is Losing" is now online at The Future of Freedom Foundation website.

Addendum: If anyone has any doubt regarding the worthlessness of the O'Hanlon/Pollack analysis of the Iraq "surge" (discussed in "Winning Is Losing"), see the account of Glenn Greenwald's interview with O'Hanlon here. A sample:

[I]t is very difficult to credit him and Pollack with good faith, as though they are guilty of nothing more than sloppy "scholarship."

A failure to disclose obviously critical facts that bear on the credibility of their "findings" and a willingness to ground their conclusions in patently one-sided and highly controlled data are far more serious sins than mere sloppiness. It is difficult to avoid reaching any conclusion other than that they willfully served as propaganda tools in order to bolster the perception of success for a war and a "Surge" strategy which they prominently supported and on which their professional reputations rest....

Moreover, they not only acquiesced to the fraud that they are "critics of the administration," they actively propagated it in order to lend their claims credibility they did not deserve.

This was clearly a propaganda trip arranged by the U.S. Department of Defense, and O'Hanlon and Pollack, hawks and Bush boosters all along, played their lackey roles well. No one should be fooled by the apparently detached organizational affiliations of these so-called scholars. They are partisans pure and simple.

Today is the anniversary of the atomic bombing of Hiroshima, one of President Harry Truman's two acts of butchery against Japan in August 1945. There isn't much to be said about those unspeakable atrocities that hasn't been said many times before. The U.S. government never needed atomic bombs to commit mass murder. It's "conventional" weapons have been potent enough. But considering how the "leaders" saw The Bomb, its two uses against Japan stand out as especially heinous acts. The U.S. government may not have used atomic weapons since 1945, but it has not yet given up mass murder as a political/military tactic. Presidential candidates are still expected to say that, with respect to nuclear weapons, that "no options are off the table."

The anniversary of the Nagaski bombing is Thursday.

Rad Geek People's Daily has a poignant post here. Rad says: "As far as I am aware, the atomic bombing of the Hiroshima city center, which deliberately targeted a civilian center and killed over half of the people living in the city, remains the deadliest act of terrorism in the history of the world."
Posted by Sheldon Richman at 6:21 PM 6 comments

Labels: terrorism, the state, war
Email ThisBlogThis!Share to TwitterShare to FacebookShare to Pinterest

To change the subject, I've taken up the electric bass. Some guys my age buy sports cars, motorcycles, or sailboats. Here's my far-less-dangerous new toy, a Fender Squier Jazz Bass. 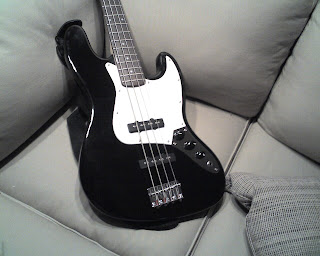 Posted by Sheldon Richman at 7:41 AM 16 comments

If we didn't have it, we wouldn't need it. Think about it.
Posted by Sheldon Richman at 4:02 PM 2 comments

Scott Horton interviewed me on Antiwar Radio yesterday. You can listen here.
Posted by Sheldon Richman at 12:55 PM 0 comments

No Substitute for History

The great economist Ludwig von Mises showed that economics can be deduced from the axiom that human beings act: individuals consciously select ends and apply scarce means to achieve them. By examining the logical implications of that undeniable fact, one can come to understand the concepts value, cost, time preference, supply, demand, money, price, profit, interest, and so on. In light of this, it is noteworthy that Mises was also an accomplished historian. And more than that, he was an important historiographer; that is, he was interested in the why and how of history. This theorist who is so identified with the a priori method in economics also believed that a knowledge of history and its methods was indispensable to understanding the world.

The rest of this week's TGIF column, "No Substitute for History," is at the Foundation for Economic Education website.

Cross-posted at Liberty & Power.
Posted by Sheldon Richman at 7:46 AM 0 comments

The Wall Street Journal published a few letters responding to Randy Barnett's article about libertarians and the Iraq war, including excellent, though cut-down, letters by Robert Higgs and Mario Rizzo. Alas, mine was not among them. So here it is:

While Randy Barnett ("Libertarians and the War," July 17) was at it, why didn't he also attempt a libertarian justification of state torture, extraordinary rendition, suspension of habeas corpus, secret CIA prisons, warrantless eavesdropping, secret searches and seizures, destruction of financial privacy, a national ID card, and the president's autocratic Unitary Executive Theory. I'm sure he would have been no more successful than he was at trying to provide a libertarian defense for imperial wars.

Posted by Sheldon Richman at 8:37 AM 2 comments