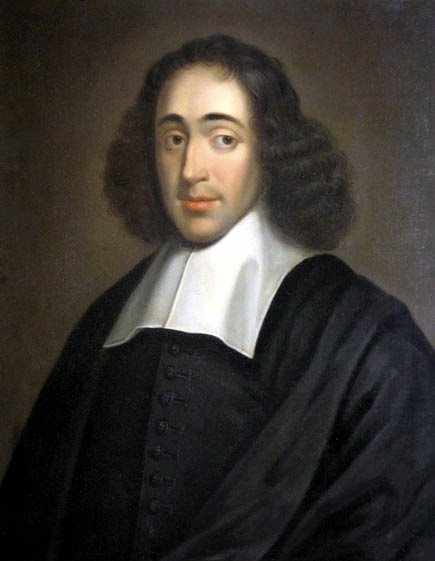 That's what I call a rough day at the synagogue. The cherem, or excommunication, happened on July 27, 1656, at Talmud Torah congregation in Amsterdam.

Abolish the Income Tax and IRS

For some time now we’ve lived with the scourge of civil asset forfeiture, under which the police can seize a person’s property on the mere suspicion it was used in a crime and without having to charge the owner with an offense. Since the authorities have no burden to prove guilt beyond a reasonable doubt, the burden of proving innocence falls on the hapless citizen who wishes to recover his property.

Amazingly, people describe as free a society that features this outrage.

Now it comes to light that the Internal Revenue Service does something similar. The New York Times reports that the IRS seizes bank accounts of people whose only offense is routinely to make deposits of less than $10,000. If you do this enough times, the IRS may suspect you are trying to avoid the requirement that deposits of $10,000 or more be reported by the bank. The IRS keeps the money, but the depositors need not be charged with a crime.

You read that right.

Read it here.
Posted by Sheldon Richman at 5:50 AM 0 comments

TGIF: The State Is No Friend of the Worker

The election season is upon us, and we’re hearing the usual political promises about raising wages. Democrats pledge to raise the minimum wage and assure equal pay for equal work for men and women. Republicans usually oppose those things, but their explanations are typically lame. (“The burden on small business would be increased too much.”) Some Republicans endorse raising the minimum wage because they think opposition will cost them elections. There’s a principled stand.

In addressing this issue, we who believe in freeing the market from privilege as well as from regulation and taxes should be careful not to imply that we have free markets today. When we declare our opposition to minimum-wage or equal-pay-for-equal-work legislation, we must at the same time emphasize that the reigning corporate state compromises the market process in fundamental ways, usually to the detriment of workers. Therefore, not only should no new interference with the market be approved, but all existing interference should be repealed forthwith. If you omit that second part, you’ll sound like an apologist for the corporatist status quo. Why would you want to do that?

Obama Still Does a Good Imitation of Bush

We really should be used to this by now. After almost six years in office, President Obama is far more like George W. Bush in national-security matters than he led the American people to believe.

For example, the New York Times’ Charlie Savage reports that Obama has yet to decide whether the international ban on torture applies to U.S. government conduct outside the United States.

Read it here.
Posted by Sheldon Richman at 9:11 AM 0 comments

Here is the video from my Future of Freedom/Liberty.me webinar on the anti-militarist libertarian tradition.

Posted by Sheldon Richman at 8:06 AM 0 comments

I lost one of my favorite teachers this week, as did so many other libertarians, not to mention the freedom movement as a whole. Leonard P. Liggio, 81, died after a period of declining health. Leonard was a major influence on my worldview during the nearly 40 years I knew him. While I had not seen him much in recent years, I have a hard time picturing the world — and the noble struggle for liberty — without him. He was one of my constants.

Read TGIF here.
Posted by Sheldon Richman at 7:22 AM 0 comments

The Politicians Are Scaring You Again

They are doing it again. “They” are the war-party politicians, Democrats and Republicans. “It” is scaring you into supporting another war in the Middle East.

Read the full op-ed.
Posted by Sheldon Richman at 7:34 AM 0 comments

Next Tuesday, Oct. 21, at 7 p.m. central, I'll conduct a webinar on "The Antimilitarist Libertarian Tradition," for The Future of Freedom Foundation and Liberty.me. Below is a preview.

Posted by Sheldon Richman at 7:30 AM 0 comments

We Have Lost a Giant: Leonard Liggio, RIP

I'm sad to report that Leonard P. Liggio, the indefatigable globetrotting builder of the modern libertarian movement, whose encyclopedic knowledge of history astounded even seasoned historians, died today at age 81. Leonard was the quintessential gentleman and scholar. No one was more generous with his time or more interested in helping young libertarians in their intellectual careers. He was an amazing fount of knowledge and advice, leaving his mark on every institution and individual with whom he came into contact.

I believe I met him in 1978 at the first Cato Institute summer seminar at Wake Forest University. (It's possible I was introduced to him a year earlier in San Francisco.) In the second half of the 1980s I worked with him at the Institute for Humane Studies. He was immensely helpful to me in many instances as I was writing and struggling to understand some historical episode. From IHS, Leonard went to the Atlas Network as executive vice president of academics.

He could talk authoritatively about the most obscure events in history -- always with insight, amazing detail, and humor. It is hard to imagine anyone knowing more about the struggle for liberty throughout the ages. All his life he was dedicated to peace, as an intellectual, as a teacher, and in earlier days, as an activist. He was truly unique, the quiet radical.

Leonard was known and admired by countless libertarians the world over. They mourn his departure now. It was an honor to have known and learned so much from him. I will long remember his beaming eyes and smile, his soft voice, and his gentle ways.

Read the Atlas Network's obituary.
Watch this video tribute to Leonard.
Listen to A Conversation with Leonard Liggio.
Read the obituary by Brian Doherty at Reason.
Watch Tom Palmer's discussion of Leonard's life and work.

David Hume (1711-1776) was no hardcore libertarian, but he was a provocative thinker and a key figure in the development of liberalism. Hume helped make the Scottish Enlightenment the important period it was. He also can be fun to read. Observe this from his essay “Of the Independency of Parliament”:


Political writers have established it as a maxim, that, in contriving any system of government, and fixing the several checks and controuls of the constitution, every man ought to be supposed a knave, and to have no other end, in all his actions, than private interest. By this interest we must govern him, and, by means of it, make him, notwithstanding his insatiable avarice and ambition, co-operate to public good. Without this, say they, we shall in vain boast of the advantages of any constitution, and shall find, in the end, that we have no security for our liberties or possessions, except the good-will of our rulers; that is, we shall have no security at all.

Read it all here.
Posted by Sheldon Richman at 7:58 AM 0 comments

A 19-year-old Chicago-area man was arrested last weekend for attempting to help the Islamic State in Iraq and Syria (ISIS). The U.S. government says Mohammed Hamzah Khan, an American citizen, faces 15 years in prison because he was at an airport with a ticket to Turkey and had left references to ISIS and a note to his parents saying he was going to Syria.

Meanwhile, the Obama administration says it will step up outreach efforts with American Muslims to counter ISIS’s campaign to attract young Western Muslims to its cause.

Is this any way for the government to keep the turmoil in Iraq and Syria from washing up on America’s shores?

Read it here.
Posted by Sheldon Richman at 10:20 AM 0 comments