TGIF: Of Malice and Straw Men

We libertarians must be onto something. Why else would critics work so hard to construct straw men to demolish rather than contending with our actual arguments?

Right from the top you could tell that Stephen Metcalf’s recent blast in Slate would be no different.

Read the full TGIF here.
Posted by Sheldon Richman at 9:58 AM 0 comments

Despite President Obama’s trumpeted force drawdown in Afghanistan, by the end of next summer more than twice as many U.S. troops will be fighting in that country’s civil war as there were when he became president in 2009. His soothing words notwithstanding, a force of about 70,000 will remain there at least until the end of 2014. We can be sure, however, that that won’t stop the president from campaigning for reelection on a peace platform.
One problem: Not much is changing.

Read the full op-ed here.
Posted by Sheldon Richman at 9:56 AM 0 comments

President Obama apparently thinks that until the latest recession, no business realized it might reduce its workforce by substituting machines and other high-tech devices. When asked by NBC’s Ann Curry why he hasn’t been able to convince business owners to hire more people (as if the question makes any sense), Obama explained:

There are some structural issues with our economy where a lot of businesses have learned to become much more efficient with a lot fewer workers. You see it when you go to a bank and you use an ATM, you don’t go to a bank teller, or you go to the airport and you’re using a kiosk instead of checking in at the gate.

It is astounding to hear Obama invoke the old argument that technological advances create permanent idleness among workers. I haven’t heard that one in years.

Posted by Sheldon Richman at 11:04 AM 1 comments

President Obama demonstrates his utter contempt for the American people — and the law — when he says the War Powers Resolution does not apply to his intervention in Libya because, as the White House put it, “U.S. operations do not involve sustained fighting or active exchanges of fire with hostile forces, nor do they involve U.S. ground troops.”

Update: This op-ed was written before the New York Times revealed that Obama ignored the judgment of top Pentagon and Justice Department lawyers that the Libyan adventure indeed falls under the War Powers Resolution.

Posted by Sheldon Richman at 10:55 AM 0 comments

The White House says the Libya intervention is not subject to the War Powers Resolution because what the U.S. government is doing there -- sending killer drones and providing intelligence for other NATO air assaults on Qaddafi's forces and residence -- doesn't constitute "hostilities."
Really. The spokesman said that. With a straight face. Read about it here.
As I've long said, if you want to make sense of government statements, keep one thing in mind: They think we are morons.
Posted by Sheldon Richman at 5:36 PM 1 comments

TGIF: Affording It All

People who don’t understand — or who don’t care about — economics say funny things. Well, they would be funny if they weren’t so damaging when translated into government policy. Take Lawrence O’Donnell, host of MSNBC’s The Last Word with Lawrence O’Donnell.

Read TGIF: "Affording It All" here.
Posted by Sheldon Richman at 8:05 PM 0 comments

Op-Ed: The Media Distract the Public from War

If one is to judge by the tone of the television commentators, America must be deep in a crisis. Long stretches of cable time are devoted to the breaking news. Each detail is presented as more grave and consequential for the republic than the last. The fate of the country surely hangs in the balance.

What is it? War? Fiscal crisis? Mass unemployment? A double-dip recession?

No. A congressman was caught sending lewd photographs of himself to women over the Internet.

I arrived home last night to find on my doorstep a copy of the new book Rabbi Outcast: Elmer Berger and American Jewish Anti-Zionism by Jack Ross. How thrilling! I knew Rabbi Berger, who died in 1996, and admired him greatly for his courageous work on behalf of what he called “emancipation and integration” and against Jewish nationalism, or Zionism. (I’ve been reading his book The Jewish Dilemma, published in 1945, a well-reasoned yet passionate critique of Theodor Herzl’s program and beyond.) He was truly the last great Classical Reform Jewish rabbi – Classical Reform Judaism having been founded in opposition to nationalism, to the ideas of diaspora and return to Zion. (“We consider ourselves no longer a nation, but a religious community, and therefore expect neither a return to Palestine, nor a sacrificial worship under the sons of Aaron, nor the restoration of any of the laws concerning the Jewish state.” –from The Pittsburgh Platform, 1885) Berger was a founder and long time director of the American Council for Judaism, which opposed formation of the state of Israel, and later of American Jewish Alternatives to Zionism. Among ACJ's members were Frank Chodorov and Murray Rothbard. (ACJ was the subject of Thomas Kolsky’s 1992 book Jews Against Zionism.) 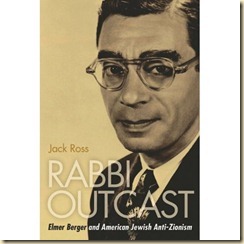 Dramatic changes have taken place in the last decade with respect to the views of the American Jewish community toward Israel and Zionism. Since the beginning of the Second Intifada in 2000, the involvement of the Israel lobby in precipitating the Iraq War and promoting war on Iran, and Israel’s widely condemned wars in Lebanon and Gaza, large swaths of the American Jewish community have been disenchanted with Israel and Zionism as at no other time since the founding of the State of Israel.

However, anti-Zionism in America has a long history. Elmer Berger was undoubtedly the best-known Jewish anti-Zionist during most of his lifetime, particularly from World War II through the 1967 Six-Day War and its aftermath. A Reform rabbi, Berger served throughout that period as the executive director of the American Council for Judaism, an anti-Zionist organization founded by leading Reform rabbis.

Author Jack Ross places liberal Jewish anti-Zionism (as opposed to that of Orthodox or revolutionary socialist Jews) in historical perspective. That brand of anti-Zionism was virtually embodied by Rabbi Berger and his predecessors in the Reform rabbinate. He advocated forcefully for his position, much to the chagrin of his Zionist detractors. The growing renaissance of liberal Jewish anti-Zionism, combined with the forgotten work of Rabbi Berger and the American Council for Judaism, makes a compelling case for revisiting his work in this full-length, definitive biography.

Bravo, Jack Ross!
Posted by Sheldon Richman at 6:37 AM 1 comments Today is the 44th anniversary of the Israeli government's attack on the USS Liberty during the Six-Day War. Read about the infamous assault, which killed 34 men, and the shameless cover-up here.

I was never satisfied with the Israeli explanation. Their sustained attack to disable and sink Liberty precluded an assault by accident or some trigger-happy local commander. Through diplomatic channels we refused to accept their explanations. I didn't believe them then, and I don't believe them to this day. The attack was outrageous.

Posted by Sheldon Richman at 7:34 AM 0 comments

Posted by Sheldon Richman at 8:02 AM 0 comments

NATO announced that the Libyan intervention will be extended for another three months. So what President Obama said would be a matter of days, not weeks, will in fact last many months. It’s safe to assume that Western powers will be meddling there a year from now.

One thing we know for sure, however, is that the U.S. intervention is doubly illegal. Obama had no legal authority to enter the war, and given that he entered it anyway, the 1973 War Powers Resolution required that on May 20 — 60 days after the intervention began — Obama either procure authorization from Congress or cease all operations.

Posted by Sheldon Richman at 7:33 AM 0 comments

In a recent discussion about copyright, my interlocutor suggested that the unauthorized publishing of a book in effect makes a slave of the author because the publisher profits off the author’s labor without consent. But that begs the question by assuming what is in dispute, namely that the publisher took something that belongs to the author. But what?

The rest of TGIF: Slave Labor and Intellectual Property is here.
Posted by Sheldon Richman at 9:40 AM 0 comments

Wouldn't a beer commercial that tells you to "stay thirsty" be telling you not to drink beer?

Labels: logic
Email ThisBlogThis!Share to TwitterShare to FacebookShare to Pinterest

The about-to-be-released book Freedom and School Choice in American Education includes my chapter,“‘Unbounded Liberty, and Even Caprice’: Why ‘School Choice’ Is Dangerous to Education,” which argues that any government involvement in the financing of education must sabotage the free market’s entrepreneurial discovery process and stifle the development of education. The chapter, along with most of the book’s chapters, was presented at a 2008 conference sponsored by the Foundation for Educational Choice (formerly the Milton and Rose Friedman Foundation for Educational Choice) and the Clemson Center for the Study of Capitalism. The book was edited by Greg Forster and C. Bradley Thompson.
In the book’s foreword Harvard University professor Paul E. Peterson writes:

In the strongest statement of all, Sheldon Richman draws upon classic economic theory to make the case that any government involvement–even school vouchers and tax credit subsidies–will ‘forbid the full blossoming of the entrepreneurial environment that is indispensable for optimal education.’ Better than any partial solutions is a commitment to letting the current system implode so that the country, in final desperation, will finally return to free market principles. One wonders whether the charitable tax deduction, an important prop for education’s private sector, survives Richman’s strict prohibition on any government involvement at all….

…We all benefit from Richman’s clear iteration of market theory, as he makes so utterly clear the distance school choice has yet to travel before it even begins to approximate that ideal.

Posted by Sheldon Richman at 7:19 AM 4 comments