Inflation Is the Last Thing We Need

Because Fed-created money enters the economy at particular points (through banks and bond dealers), a select few people get it sooner than the rest of us. Those who are thus privileged are able to buy at the old, lower prices, while the rest of us don’t see the money until prices have risen. That is an implicit tax and transfer.

And the problem isn’t simply a rising price level. Relative prices are what provide entrepreneurs and investors the information required for rational economic calculation and service to consumers. Inflation changes relative prices. Thus, it distorts the price system and, in turn, the multidimensional economic structure. That means any stimulus is unsustainable because the inflationary policy will eventually end and unemployment must follow as the inflation-induced errors are revealed.

Read it all.
Posted by Sheldon Richman at 9:49 AM 1 comments

Kinsella, Tucker, and Me on IP and Obamacare

Here's the video of my Liberty Talk with Stephan Kinsella and Jeff Tucker. I thoroughly enjoyed this. 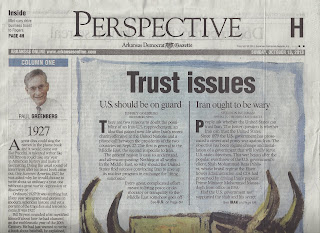 Posted by Sheldon Richman at 9:39 AM 0 comments

Labels: Iran
Email ThisBlogThis!Share to TwitterShare to FacebookShare to Pinterest 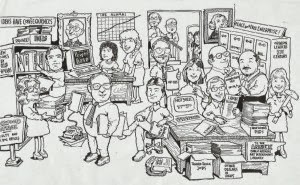 Today is the 75th birthday of one my mentors, Walter Grinder. I first became aware of Walter in the 1970s through the Center for Libertarian Studies and its annual Libertarian Scholars Conference. But I first saw him in action in 1978, when he lectured at the first Cato Summer Seminar, at Wake Forest University. That gathering had a huge influence on me (and so many others), and Walter was a major reason. Later I worked with him at the Institute for Humane Studies at George Mason University , 1985-91. He has always been a great source of guidance, as well as bibliographic and other intellectual information. He has counseled more young libertarians about their scholarly work and careers than could ever be counted. His contributions to liberty are incalculable.
Happy birthday to a friend and role model. Happy birthday, Walter!

"It is nationalism which engenders nations, and not the other way around." --Ernest Gellner
Posted by Sheldon Richman at 9:26 AM 0 comments

Not everyone wants peace with Iran. Some want war.

Read about it here.

To appreciate how monstrous Richard Nixon's and Henry Kissinger's record is, read my latest TGIF: "Treating People like Garbage."
Posted by Sheldon Richman at 10:06 AM 0 comments

I just saw a commercial for the Wounded Warrior
Project that brought tears to my eyes. It shows a little girl reading to and helping her young but feeble father, who suffered a severe head wound in Iraq. It outraged me that a young daughter should have to see her father in that condition, and I said out loud, "That is what the state does to families."

See if you have the same reaction.

What Netanyahu Fears from a Warming of Iran-US Relations

Israel's leadership seeks to maintain the convenient reality of a neighboring region populated by only two types of regimes. The first type is regimes with a degree of dependence on the United States, which necessitates severe limitations on challenging Israel (including diplomatically). The second type is regimes that are considered beyond the pale by the United States and as many other global actors as possible, and therefore unable to do serious damage to Israeli interests.
Israel's leadership would consider the emergence of a third type of regional actor -- one that is not overly deferential to Washington but also is not boycotted, and that even boasts a degree of economic, political, and military weight -- a deeply undesirable development. What's more, this threatens to become a not-uncommon feature of the Middle East: Just look at Turkey under Prime Minister Recep Tayyip Erdogan, or Egypt before the July 3 coup, or an Iran that gets beyond its nuclear dispute and starts to normalize its relations with the West.

There are other reasons for Netanyahu to oppose any developments that would allow Iran to break free of its isolation and win acceptance as an important regional actor with which the West engages. The current standoff is an extremely useful way of distracting attention from the Palestinian issue, and a diplomatic breakthrough with Iran would likely shine more of a spotlight on Israel's own nuclear weapons capacity. But the key point to understand in interpreting Netanyahu's policy is this: While Obama has put aside changing the nature of the Islamic Republic's political system, Israel's leader is all about a commitment to regime change -- or failing that, regime isolation -- in Tehran. And he will pursue that goal even at the expense of a workable deal on the nuclear file.

My latest op-ed, "Can Iran Trust the United States?," points out that the full historical context indicates that Iran is the aggrieved party in its conflict with the U.S. government. It is up to President Obama to demonstrate his peaceful intent. He should start by lifting all economic sanctions.

Posted by Sheldon Richman at 10:07 AM 3 comments

Labels: Iran
Email ThisBlogThis!Share to TwitterShare to FacebookShare to Pinterest

Guillermo Jimenez interviewed me again on Traces of Reality, this time about the illegitimacy of the government's debt. Have a listen.
Posted by Sheldon Richman at 2:25 PM 0 comments