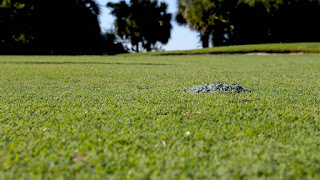 I am not, nor have I ever been, a golfer. I did golf once, just before the turn of the century, and I disliked it. Nevertheless, I live by a cardinal principle in golfer etiquette: Replace your divots.

A divot, of course, is a chunk of turf that is dislodged by a golf shot, leaving a hole on the course. Golfer etiquette requires that you should put the divot back in the hole if that's possible. This is a common-sense act of consideration for other golfers because a ball in a hole is hard to hit.

We might be tempted to place this principle within rights theory. For example, the owner of the golf course probably has a rule, a term of use, that you must replace your divots. As a contractual matter, then, you are obligated to do so. Failure to comply is to violate the terms of your contract and hence a violation of the rights of the property owner. This reasoning is also used to show why falsely shouting fire in a theater is wrong.

I have no beef with that take, but there's more to the story because even if it were not a violation of someone's contractual rights, it would still be wrong to ignore your divots or falsely shout fire when it could endanger people. (You may shout fire, however, in a crowded online chat room. Context matters.)

Can this moral point be proved? Well, yes, in the sense that Aristotle thought ethics could be validated. Whenever we act we aim at an ultimate good: happiness, the good life, flourishing -- call it what you will. We can't help it because the idea of an ultimate end is baked into the very notion of action, which is the means that gets you there. (Sounds like praxeology, doesn't it?) "Every art and every kind of inquiry, and likewise every act and purpose, seems to aim at some good: and so it has been well said that the good is that at which everything aims," Aristotle wrote to launch his Nicomachean Ethics. "If then in what we do there be some end which we wish for on its own account, choosing all the others as means to this, but not every end without exception as a means to something else (for so we should go on ad infinitum, and desire would be left void and objectless),—this evidently will be the good or the best of all things."

What plausibly (or intuitively) appears to advance flourishing you may reasonably presume to be good. But such presumptions are in principle defeatible by evidence or by a clash with other well-founded moral principles. A Socratic inquiry would uncover such conflicts.

In the Aristotelian and Spinozan sense, the flourishing of rational social animals -- that's us -- is advanced by, among other things, reason-based relationships with other people (that is, no force, no injustice). I'm better off surrounded by people who live by reason (even if only by semi-conscious habit) than by irrational people. So I want to encourage other people to be rational, which in part means dealing with them on the basis of reason and respect. QED.

For more, I recommend Roderick T. Long's important monograph Reason and Value: Aristotle versus Rand and my "What Social Animals Owe to Each Other."

Posted by Sheldon Richman at 4:41 AM 0 comments

Pascal’s Wager is a familiar idea. It goes something like this: regardless of what you may think about the existence of God, rational cost-benefit analysis says you should sign on. After all, if you do and you’re wrong, what have you lost? But if you don’t and you’re wrong, uh oh — you’re in big trouble, buster. (I’m not saying this makes sense, by the way.)

Something similar has gone on with the coronavirus pandemic and the draconian economic policies embraced by many governors in the United States, best exemplified New York Gov. Andrew Cuomo and California Gov. Gavin Newsom. They have made a wager sort of like this: if we don’t shut the economy down and the pandemic fulfills the worst-case scenario, we are all in big trouble; but if we do shut the economic down and the pandemic falls closer to the best-case scenario, what will have been lost?

For those with their eyes open, the answer to this last question is simple: a lot. Forbidding most economic activity has to impose substantial hardship — material and otherwise — on countless people, not to mention future generations. I won’t go into detail, and I shouldn’t need to. Just think about it for a few moments. (See David Henderson’s “End the Lockdowns Now.”) And I haven’t mentioned the future harm from government’s so-called solutions: enormous deficit spending, money creation by the Federal Reserve, and the ratchet (specifically, the Higgs) effect from precedents set.

The point is that it’s easy to “reason” to the policy outcome you want if you list only the real and imagined benefits and ignore all the burdens. This was what Frédéric Bastiat was getting at in his brilliant essay “What Is Seen and What Is Unseen.”

The blunt-instrument policies adopted by many governors were chosen in the dark. Flawed statistical models seemed to shed light, but knowledgeable people questioned the validity of those models from Day One. At any rate, we know more now (though not nearly enough), so it’s time for the lockdown orders to be lifted, liberating society’s widespread entrepreneurial problem-solving process to do its thing.
Posted by Sheldon Richman at 5:38 AM 0 comments

Trump has vetoed Congress’s effort to keep him from going to war against Iran unilaterally. Nothing remarkable there. We’ve come to expect such things from the fraud who posed as an antiwar candidate.

What’s interesting is that Trump has reminded us of what a narcissist he is. That fact is so much a part of the landscape that it can be hard to notice these days.

In vetoing the bill passed under the War Powers Resolution, a 1970s post-Vietnam attempt to restore Congress’s exclusive power under the Constitution to make war, Trump said, “This was a very insulting resolution….”

Insulting? That’s why he vetoed it? Apparently Trump is incapable of seeing congressional action he doesn’t like as anything but personal. It’s hard to imagine another president saying this publicly. Other presidents would have pushed back (erroneously) against the constitutional war-powers argument, but they wouldn’t have made it personal, even if they suspected it.

Hell, yes! Radical abolitionist anarchist libertarians can -- and I say ought to be -- incrementalists because, sorry, "abolition now!" is not on the menu today. No contradiction exists in the radical incrementalist or the incrementalist radical.

Tom Knapp addresses this point quite capably in his re-post "Blast from the Past -- Without a Net: Compromise versus Calculation." I recommend it highly.

The reason that no conflict need exist between abolitionism and incrementalism is that the former is an end while the latter is a means:

Abolitionism is the notion that wrongs should be abolished rather than simply minimized (and, at the abstract anarchist extreme -- no insult intended, that happens to be where I live myself -- that all wrongs must be abolished in order for the abolitionist to claim victory). Abolition is a proposed end or set of ends.

Thus, Knapp adds, "incrementalist means are not only available to "purists" and 'abolitionists,' but used by them, and are therefore not available only to 'pragmatists.'" He also has much to say about "pragmatists," who turn out to be pretty poor incrementalists.

I wrote about this issue five years ago in "Rothbardian Thoughts on Strategy."

This is to let you know that I've started a new blog: The Logical Atheist. If the subject interests any of you, pay it a visit and join the conversation.
Posted by Sheldon Richman at 11:39 AM 1 comments

Atomistic Individualism for the Win!

I'd say defenders of the automobile versus mass transit are looking pretty good these days.
Posted by Sheldon Richman at 10:24 AM 0 comments