Again Trump has it backwards. According to NATO's internal logic, the US should pay the members -- not the other way around -- for providing services to the empire and a tripwire for war. The empire doesn't protect; it provokes and endangers. Who would willingly pay for that?

What She May Be Thinking

I'm Hillary Clinton and I approved this message:

I could bomb a daycare center in Afghanistan or Syria and I wouldn't lose any support, okay?
Posted by Sheldon Richman at 9:17 AM 1 comments

Doing good with others people's money taken at gunpoint is no virtue.
Posted by Sheldon Richman at 11:06 AM 0 comments 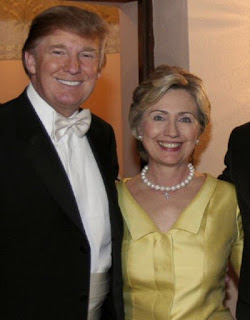 Posted by Sheldon Richman at 11:03 AM 0 comments

Does Trump Know Anything?

If Trump really wanted to run the government like a business, he'd have to abolish taxation and offer government's purported services in a competitive marketplace. Without competition and a true profit-and-loss test, government cannot be like a business. Prospective buyers must be free to say no to sellers and to go elsewhere if they wish -- and I don't mean to another country.
Posted by Sheldon Richman at 11:01 AM 0 comments

If you want to understand the context in which the US demonization of Russia and Vladimir Putin is occurring, read Joshua Itzkowitz Shifrinson's excellent piece in the Los Angeles Times, "Russia's got a point: The U.S. broke a NATO promise."

In summary, U.S. presidents, Democratic and Republican, broke a 1990 promise to Russia not to extend NATO eastward to the Russian border, a promise made in return for Russia's pledge not to interfere with the reunification of Germany and its membership in NATO. (We may well ask why NATO continued after the Warsaw Pact and then the Soviet Union disappeared.) The US promise was broken when the members of the defunct Warsaw Pact and the Baltic states were incorporated into NATO, and two former Soviet Republics, Georgia and Ukraine, were widely discussed as future NATO members. (This has not happened yet, but the US government has intervened in both countries to keep them from being too close to Russia. In Ukraine this took the form of a coup, ousting an elected president, however objectionable he was.)

Since NATO was formed in opposition to the Soviet Union and its alliance, the expansion to the Russian border was reasonably interpreted as threatening. That a strong man--Putin--emerged to push back against American military provocation and economic intervention in the Russian economy should have been expected.


NATO’S widening umbrella doesn’t justify Putin’s bellicosity or his incursions in Ukraine or Georgia. Still, the evidence suggests that Russia’s protests have merit and that U.S. policy has contributed to current tensions in Europe.

Western provocation of Russia is dangerous. NATO holds military exercises close to the Russian border, and it wouldn't take much for an "incident" to lead to a crisis and worse. Instead of engaging in moves and counter-moves, the two powers should be talking about dismantling their nuclear arsenals.

Just Sit Back and Enjoy the Show

The feigned indignation about possible Russian meddling in the US election is entertaining.
Posted by Sheldon Richman at 12:27 PM 0 comments

Labels: Russia
Email ThisBlogThis!Share to TwitterShare to FacebookShare to Pinterest

Is there not irony in Hillary Clinton's supporters recounting all the good deeds she performed away from the cameras without expectation of political gain?
Posted by Sheldon Richman at 7:49 AM 1 comments

We can argue about a given politician's intentions from now until doomsday. What must not be forgotten is that without sound social-economic theory good intentions count for zilch. We know what the road to hell is paved with.

Posted by Sheldon Richman at 6:54 AM 2 comments

Trump still doesn't (want to) get it. ISIS is not the result of U.S. weakness, as he says, but of strength, i.e., power.
Posted by Sheldon Richman at 12:35 PM 0 comments

If Trump's business interests explain his nonbelligerence toward Russia, wouldn't that support the the pacifist case for free international trade? If goods don't cross borders NATO soldiers will.

Ironically, Bastiat, Cobden, and Bright could be vindicated by an ardent protectionist.
Posted by Sheldon Richman at 12:28 PM 0 comments

"I am not going to let companies move to other countries, firing their employees along the way, without consequences," Trump said in his acceptance speech.

Is any comment necessary?
Posted by Sheldon Richman at 7:22 PM 0 comments

Trump's Plan for His First Day in Power?

In his acceptance speech Trump said, "Beginning on Jan. 20th, 2017, safety will be restored.”

Note that Trump does not say that beginning on inauguration day Americans will feel safe. He says "safety will be restored."

Is he promising -- or threatening -- martial law?
Posted by Sheldon Richman at 6:37 PM 1 comments

My Kind of Candidate...

That would be a real law-and-order candidate.
Posted by Sheldon Richman at 12:45 PM 0 comments

As long as the police are charged with detecting and stopping consensual transactions -- concerning, for example, drugs, guns, gambling, sex, and untaxed cigarettes and CDs -- tension and violence will continue. Abolishing victimless-crime laws won't end institutional racism, but many opportunities for it will be eliminated.

The key feature of a victimless-"crime" transaction is that unlike, say, battery, it has no complaining participant -- the transaction is consensual. Because of this, police find they "need" to engage in surveillance, entrapment, cultivation of informants, stop-and-frisk, and other methods that breed distrust between the people and the system. This in turn gives rise to a view of the police as an occupying army, especially in poor minority neighborhoods, where for a variety of reasons -- occupational licensing and government schools, to name two -- the black market presents attractive alternatives to poverty.

Other measures to be taken: abolish all occupational licensing and minimum-wage laws, which impede people's efforts to prosper. (Providing goods and services without a license is a victimless crime if no deception is involved.)

Thus Dallas Chief David Brown's invitation to Black Lives Matter activists to join the police department and work for reform from within badly misses the point. This is not just about bad apples and community policing.

Another way to put it: if we didn't have cops, we wouldn't need them.
Posted by Sheldon Richman at 2:34 PM 2 comments

TGIF: Trump, Saddam, and the Presumption of Innocence

The horrifying thing about Trump's recent remarks about Saddam Hussein is not that he expressed admiration for the late Iraqi dictator -- in fact Trump called him a "bad guy" three times. What is horrifying is that Trump seemed envious that Saddam could "kill terrorists" without due process -- the most important element of which is the presumption of innocence, which places the burden of proof of guilt squarely on the government's shoulders. "He killed terrorists" Trump said of Saddam. "He did that so good. They didn't read them the rights. They didn't talk. They were a terrorist, it was over." (Emphasis added.)

Brexit, Scott Horton, and Me

Big difference -- YUGE -- between delivering bombs and delivering goods.
Posted by Sheldon Richman at 9:33 AM 1 comments