TGIF: So What If Freedom Isn't Free?

My reply to those who admonish us libertarians that freedom isn't free.
Posted by Sheldon Richman at 10:19 AM 0 comments

Here's my take on Barack Obama's May 23 major foreign-policy address.

For more on the phony nature of the speech and alleged policy changes, see William Saletan's unmaking.

I've been asked to post my list of readings in revisionist history separately so the link can be distributed. I haven't read all these books, but those I haven't gotten to yet come highly recommended by people I respect. I will add to the list from time to time.

Posted by Sheldon Richman at 10:15 AM 0 comments

Posted by Sheldon Richman at 6:40 AM 2 comments 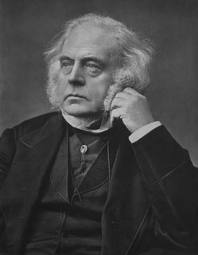 John Bright is one of the great heroes of liberalism for his devotion to free markets and peace. His speeches on peace and nonintervention make good reading for the Memorial Day weekend. Here is a sample.
Posted by Sheldon Richman at 9:47 AM 0 comments

"Pro-sweatshop" is not a libertarian position. See why here.
Posted by Sheldon Richman at 10:37 AM 3 comments

TGIF: Abolish the IRS -- and the Income Tax with It

My take on the IRS scandal.

Also see TGIF: No Intervention in Syria.
Posted by Sheldon Richman at 9:44 AM 0 comments

“I sure want to do some governing.” --Barack Obama

"To be governed is to be watched, inspected, spied upon, directed, law-driven, numbered, regulated, enrolled, indoctrinated, preached at, controlled, checked, estimated, valued, censured, commanded, by creatures who have neither the right nor the wisdom nor the virtue to do so. To be governed is to be at every operation, at every transaction noted, registered, counted, taxed, stamped, measured, numbered, assessed, licensed, authorized, admonished, prevented, forbidden, reformed, corrected, punished. It is, under pretext of public utility, and in the name of the general interest, to be place[d] under contribution, drilled, fleeced, exploited, monopolized, extorted from, squeezed, hoaxed, robbed; then, at the slightest resistance, the first word of complaint, to be repressed, fined, vilified, harassed, hunted down, abused, clubbed, disarmed, bound, choked, imprisoned, judged, condemned, shot, deported, sacrificed, sold, betrayed; and to crown all, mocked, ridiculed, derided, outraged, dishonored. That is government; that is its justice; that is its morality." --P.-J. Proudhon
Posted by Sheldon Richman at 9:15 AM 0 comments 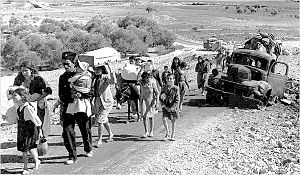 Today is Nakba Day, the day of remembrance of the catastrophe that befell Palestinians during the aggression-based and unlawful  establishment of the Jewish State of Israel 65 years ago. Over 700,000 Palestinians were driven from their homes and villages, and many massacred, in an ethnic-cleansing operation that should shock the conscience. The Arabs who remained in the Israeli state that was imposed on them by Zionist military forces have been second-class citizens from that time. Don't expect much notice of this in the mass media.

The best short introduction to this shameful series of events is Jeremy Hammond's The Rejection of Palestinian Self-Determination. See also Hammond's "The Myth of the UN Creation of Israel."

Other good reading on this matter: David Hirst's The Gun and the Olive Branch: The Roots of Violence in the Middle East, Ilan Pappe's The Ethnic Cleansing of Palestine, Gilad Atzmon's The Wandering Who? A Study of Jewish Identity Politics, and Jack Ross's Rabbi Outcast: Elmer Berger and American Jewish Anti-Zionism.

UPDATE: This has just come to my attention (HT: Mondoweiss): Amjad Alqasis's "The Ongoing Nakba: The continuous forcible displacement of the Palestinian people."
Posted by Sheldon Richman at 8:35 AM 3 comments

The problem with the gun-safety lobby is that it doesn't think big enough. See my modest proposal for gun safety.
Posted by Sheldon Richman at 9:09 AM 0 comments

I wrote this letter to the Arkansas Democrat-Gazette after reading that the University of Central Arkansas had decided to forbid faculty members and students from carrying concealed handguns. It was published today.

I see the University of Central Arkansas has chosen to prohibit concealed-carry of handguns.

Why would the school want to make the campus safe for the criminally minded? Nothing is more potentially dangerous than a gun-free zone.

The Essence of Production

P.S. Money doesn't change the essence of what I've described. It's just roundabout barter, to use a thought from Bastiat.

P.P.S. There are no "exports" and "imports." There are only what I produce and what everyone else produces.
Posted by Sheldon Richman at 8:51 AM 1 comments

TGIF: Criminal Government. Why do they get away with torture?

Posted by Sheldon Richman at 10:09 AM 0 comments

Handala by Naji Al Ali
“Logic and ethics are fundamentally the same, they are no more than duty to oneself.”
--Otto Weininger