Liam Cardenas interviewed me for his podcast. Watch it here.

Posted by Sheldon Richman at 8:18 AM 2 comments

Did Donald Trump on Inauguration Day intend to remind us of the European despotisms of the last century?

Who could miss signs? They adorned from the speech from brim to dottle with its invocations of solidarity, unity of purpose, devotion, patriotism, "loyalty to our country ... and to each other," "total allegiance," national striving, nationalism, and assurances that the state would protect us from enemies -- including even those would bestow low-priced goods on us. Then, to boot, he followed it all up with a decree that the day be known as the “National Day of Patriotic Devotion.”

Where the hell are we? And what year is it?

Read the full TGIF at The Libertarian Institute.

Posted by Sheldon Richman at 9:04 AM 3 comments

Trump's Wall and the Assault on Private Property

The Washington Post's article on Donald Trump's border wall does something unusual: it takes into account Trump's planned assault on property owners along the Mexican border. Note:


In Texas, almost all of the land along the border is privately owned. When former President George W. Bush tried to build border fencing starting in 2006 he faced stiff opposition from local ranchers and farmers, many of whom took the government to court on plans to use their land.

In many areas along the Rio Grande the fencing is built well inside the United States, as far as a mile north of the Rio Grande, to ensure that the structure doesn’t interfere with the flow of the river or is built on solid ground.... [Emphasis added.]

A popular golf course near the border in Brownsville was cut off from the rest of the city by border fencing and was forced to close in 2015.

Trump's wall will face the same facts, but Trump doesn't regard this as an obstacle. Let's remember that he has tried to use eminent domain for his own projects, and he praised the Kelo case, when the U.S Supreme Court said government's may take private property to benefit private companies. The article quotes Republican Rep. Will Hurd, "whose sprawling West Texas swing district encompasses more than 800 miles of the border. 'Many areas in my district are perfect examples of where a wall is unnecessary and would negatively impact the environment, private property rights and economy.'" (Emphasis added.)

Trump is a nationalist -- and therefore no friend of liberty.

Posted by Sheldon Richman at 9:00 AM 4 comments

On this day of all days America’s priestly political class can extol the great glory of the Almighty State without restraint — but Donald Trump is the one being crowned.
Posted by Sheldon Richman at 12:00 PM 1 comments

TGIF: A Principle for All Seasons 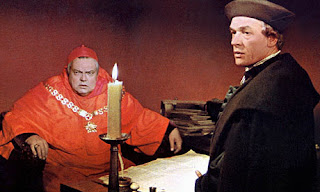 Despite my utter disdain for Donald Trump, I am uneasy about many who oppose him. My specific concern is that they apparently believe that, because of the kind of person Trump is, they may dispense with all constraint when fighting him. Thus the common-sense rules of just conduct and decency that are normally honored at least by lip service, if not by strict observance, are not regarded as binding when Trump is the target. It is a bad -- not to mention shortsighted -- idea.

Read the full TGIF at The Libertarian Institute.

TGIF (The Goal Is Freedom) appears on Fridays. Sheldon Richman, author of America's Counter-Revolution: The Constitution Revisited, keeps the blog Free Association and is executive editor of The Libertarian Institute. He is also a senior fellow and chair of the trustees of the Center for a Stateless Society and a contributing editor at Antiwar.com. Become a Free Association patron today!
Posted by Sheldon Richman at 6:56 AM 0 comments

With Trump You Get Military Parades

“That military may come marching down Pennsylvania Avenue. That military may be flying over New York City and Washington, D.C., for parades. I mean, we’re going to be showing our military.”

Heaven help us.
Posted by Sheldon Richman at 11:47 AM 2 comments

He Bombed the Poorest People on Earth

John Pilger has some choice words for those who worship Barack Obama and now fear the end of civilization with the coming of Trump.

Where was the progressives' indignation the last eight years?

TGIF: The Man Behind the Curtain

Although the Grateful Dead told us that "every silver lining's got a touch of grey" (lyric by Robert Hunter), it's my nature to look for one anyway. At the risk of being accused of gross naivete, I'd like to hope that the Trump presidency (I still can't believe I have to type those words) will once and for all sour people on government and politics.

Read the full article at The Libertarian Institute.

TGIF (The Goal Is Freedom) appears on Fridays. Sheldon Richman, author of America's Counter-Revolution: The Constitution Revisited, keeps the blog Free Association and is executive editor of The Libertarian Institute. He is also a senior fellow and chair of the trustees of the Center for a Stateless Society and a contributing editor at Antiwar.com. Become a Free Association patron today!
Posted by Sheldon Richman at 12:19 PM 1 comments

One can reasonably argue that Washington started the practice of cyber-warfare and has been a long-time practitioner of both regime change and election tampering in its relationship with much of the world…. Stepping back a bit, it is difficult to avoid the conclusion that anything Russia did or is suspected of doing in 2016 pales in comparison to what the United States has been doing for much longer and on a much wider scale.”

–Philip Giraldi, “Washington Invented Hacking and Interfering in Elections”
Posted by Sheldon Richman at 9:04 AM 1 comments

Your Tax Dollars at Work

“Judgments are not intended to imply that we have proof that shows something to be a fact.” — “Declassified Intelligence Community Assessment of Russian Activities and Intentions in Recent US Elections,” Annex B, Estimative Language
Posted by Sheldon Richman at 8:17 AM 0 comments

Hats off to John Batchelor, the radio talk-show host and podcaster, who has countered the raging Russophobia and Cold War revival by regularly interviewing the eminent Russian scholar Stephen F. Cohen. (Links to the podcasts are here.) Cohen, who taught Russian history and politics for many years at Princeton and New York universities and who is affiliated with the pro-detente American Committee on East-West Accord, is a rare voice of calm good sense on Russia, Vladimir Putin, and the hacking of the DNC and John Podesta email accounts. Batchelor is a hero for having Cohen on his program about once a week.
Posted by Sheldon Richman at 7:03 PM 0 comments

This week, thanks to the Independent Institute (which lists me as a research fellow), I was interviewed by NPR's Marketplace for a piece on Donald Trump's threat to impose tariffs on goods that come from China. (It's the first story for the January 3 show here at 2:44.) The interviewer wanted to look back at the effects of the Reagan administration's protectionist policies against Japan. (In 1988 I wrote a paper for the Cato Institute on Reagan's appalling protectionism.)

I've done many media interviews, but this one really drove home the media's lack of interest in informing their listeners and viewers on important economic topics. Of course, the producers of the show would themselves have to understand economics in order separate what's important from what's unimportant. This may be a case of the blind leading the blind. At any rate, what follows is a lightly edited transcript of the interview and what was aired from the interview.

Read the full article at The Libertarian Institute. It's also posted at the Independent Institute.

TGIF (The Goal Is Freedom) appears on Fridays. Sheldon Richman, author of America's Counter-Revolution: The Constitution Revisited, keeps the blog Free Association and is executive editor of The Libertarian Institute. He is also a senior fellow and chair of the trustees of the Center for a Stateless Society and a contributing editor at Antiwar.com. Become a Free Association patron today!
Posted by Sheldon Richman at 6:32 AM 1 comments

President-elect Trump complains that trade with China is "one-sided." Does he speak English or what? One-sided trade is like one-sided triangle: you can say it, but you can't mean (think) it. Chinese folks deliver goods to Americans (through Walmart, etc.), and we willingly buy them. The Chinese then invest some of their proceeds in the United States. Well, I guess that is one-sided -- but wait! They later reap rewards from their successful investments.

It's two-sided after all, isn't it?

Perhaps Trump means that the United States has fewer barriers to Chinese goods than China has to American goods, i.e., American consumers' freedom to buy is better respected than Chinese consumers' freedom to buy. Since Trump favors tariffs (which would raise prices to Americans and push Chinese goods out of our market), I guess he thinks respect for our freedom is bad and the denial of their freedom is good.

(Cross-posted at The Libertarian Institute. Check it out!)
Posted by Sheldon Richman at 11:57 AM 0 comments