Brexit: Which Kind of Dependence Now?

Is Brexit a move toward British independence? Some Leave and Remain partisans may believe so, differing only over whether that's good or bad.

But, as usual, things are more complicated. We should hope that, in one respect, Britain's exit from the EU will create a kind of dependence that did not exist while it was still a member of the union. (But see Jacob T. Levy's well-argued opposition, as well as J.D. Tucille's rebuttal of the xenophobia explanation and Matt Ridley's defense of Leave.)

Excellent news out of the UK. The next step is for the anti-elites -- there, here, everywhere -- to see that the state itself is their enemy, no matter who sits on top. Only natutal-law market anarchism would fully dethrone the oppressors.

Labels: Brexit
Email ThisBlogThis!Share to TwitterShare to FacebookShare to Pinterest

To see where we are, watch these two videos.

Posted by Sheldon Richman at 10:15 AM 2 comments

Any Banner Will Do 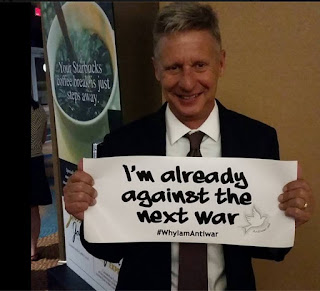 Posted by Sheldon Richman at 9:58 AM 0 comments

Why are Donald Trump, Ted Cruz, and Marco Rubio afraid to use the term "radical homophobic terrorism"? Are they slaves to political incorrectness?
Posted by Sheldon Richman at 9:11 AM 12 comments

Posted by Sheldon Richman at 9:58 AM 1 comments 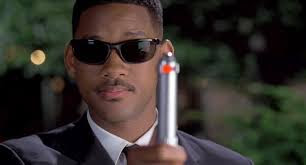 Oh Joy! With Hillary We Get Bill!

Hillary Clinton vows to draw on Bill Clinton's "wealth of experience." Let's see, that would include:
Gotta hand it to Bill. He accomplished a lot in eight short years -- all that while fooling around with an intern. How did the man do it?

How lucky are we to have all that experience to draw on?

If You Love Freedom, Thank an Anarchist

It’s often said – particularly on holidays like Veterans Day and Memorial Day – that Americans owe their freedom (such as it is) to u.s. military veterans. 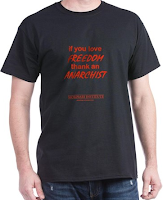 This claim has always puzzled me. In what war in living memory was the freedom of Americans at stake? Without u.s. military action, were Japanese or German troops – let alone Italian, Vietnamese, Korean, Panamanian, Afghani, or Iraqi ones – really going to be marching though Times Square? If anything, given the notorious ratchet effect whereby wars tend to produce permanent increases in government power, it seems more probable that u.s. military action has contributed to a diminution of our freedom.

Yet Americans do enjoy a greater degree of liberty, however inadequate, than citizens of many other countries around the world. To whom do we owe that fact?

So what have anarchists (and other fractious dissidents) done for the cause of freedom? In answer, I quote from two recent articles:


Anarchists have never taken power. We have resisted authoritarianism and oppression in every arena. From calling out Marxism long before its draconian aspirations became public record, to fighting and dying to resist Fascism, fighting Franco until he couldn’t afford to join Hitler and Mussolini and leading the resistance against the Nazis across Europe. We’ve fought the robber barons, the czars, the oligarchs, and the soviet bureaucrats.

And we’ve been extraordinarily popular in different regions at different points in history, although we have not yet had sufficient critical mass to completely transform the world. In every instance where anarchism surged to localized popularity with a few million adherents, as in Spain but also Ukraine and Manchuria, every surrounding power immediately put their wars on hold to collaborate in snuffing out the examples we provided of a better world, of better ways of interacting and settling disputes with one another, that do not turn to control but build a tolerable consensus for all parties when agreement is needed.

We’ve been at the forefront not just of technology like cryptocurrencies and the tor project, but we’ve also been at the forefront of struggles against patriarchy, racism, homophobia, ageism, ableism, etc., etc. Since long before there were popular coalitions like “feminism.” We smuggled guns to slaves and ran abolitionist journals. We’ve coursed through the veins of our existing society, pioneering myriad social technologies like credit unions and cooperatives. We’ve consistently served as the radical edge of the world’s conscience, and played a critical role in expanding what is possible while developing and field testing new insights and tools.

Anarchism – as many commentators have noted – has served as the laboratory of the left, of social justice and resistance movements around the world. Even where we remain marginal, the tools we invent eventually become mainstream.

[The] claim that our rights are something “given to” us, handed down from above by the government and its soldiers, is a pernicious, authoritarian, damned lie.

Who has given us our rights? Nobody. We have taken them. Every right we have, we have because we fought for it from below. We have these rights because we resisted violations of them, because we fought those who violated them &#150 sometimes fighting “the Soldier” – and compelled the state to recognize them. And the state recognizes them because it’s afraid that if it violates them we’ll damn well fight it – and its soldiers – again.

Rights have never been granted by authority. They have always been asserted against authority, and won from it. We don’t have our rights because the government and its soldiers are nice – but because we’re not. It’s not the Soldier – it’s the dissidents, the hell-raisers, the dirty flag-burning hippies, the folks with bad attitudes towards authority in general, who have given us our rights throughout history, by fighting for them.