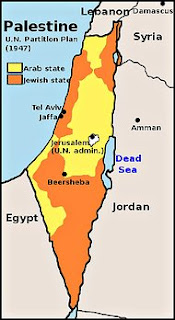 UPDATED Feb. 25, 2014
Today is the 64th anniversary of the shameful UN vote to partition Palestine into Arab and Jewish states. [CORRECTION: As Jeremy Hammond documents, the UN General Assembly had no authority, even under its own bylaws, to partition any territory. It merely recommended partition.] Needless to say, the land worked and genuinely owned by Palestinian Arabs for centuries was not the UN member states' to give; nor did the UN have the moral authority to dictate that more than a million Muslim and Christian Palestinians would henceforth be ruled by a government that claimed to belong exclusively to the Jewish people (defined in a secular, biological, not a religious, sense) no matter where in the world they live. Thus not even in theory would the new state belong to all of its citizens. Very little of the land had been legitimately purchased by European Jews. (See the details of land purchases here.) The partition set the stage for the expulsion of over 700,000 Palestinian Arabs from their homes, to which they have never been able to return, the land having been "redeemed" in the name of the Jewish people. Many Palestinians were slaughtered by the Zionist forces. This is known in the Arab world as the nakba, or catastrophe. It also created the conditions under which the state of Israel in 1967 would conquer and occupy further territory that belonged to Palestinians. The grinding and humiliating oppression of occupation goes on to this day.

Eminent Jewish voices opposed the partition and the policies of the Israeli government, but they were ignored if not worse. (See more here.)

Of course no Palestinian state ever came into existence. For one thing, the Zionist authorities and the King of then-Transjordan did not want an independent Palestinian state and colluded to prevent its emergence. The Israeli authorities claim to be committed to a just two-state solution (assuming such a thing is possible), but their actions have always belied their words, particularly the relentless building of residential areas in East Jerusalem and on the West Bank. Meanwhile since June 2007, the Israeli government has maintained a blockade of Gaza that imperils the lives of its inhabitants.

In light of this historical context, Israel's demand that the Palestinians recognize Israel's right to exist as a Jewish state as a precondition to negotiations only adds insult to monstrous injury.

This is truly the anniversary of a day of shame.

The Myth of an Israel-Centered Jewish Vote

I highly recommend this article by Allan C. Brownfeld, editor of the American Council for Judaism’s publication Issues.  The gist:

The fact is that there is no Jewish vote — only the votes of millions of individual Jewish Americans. These ballots are cast on the same basis as are those of Americans of other faiths. It is a dangerous challenge to our democracy to try to divide voters on the basis of religion, and to do so on the basis of a false picture of U.S. Middle East policy is harmful to all — to Israel, to the Palestinians, to American interests in the region and, perhaps most important, to the truth itself.

Posted by Sheldon Richman at 10:08 AM 2 comments

Bachmann Endangers the World with Her Lies

It’s way past time for Michele Bachmann to be ridiculed into the obscurity she so richly deserves. Nothing could be more irresponsible – indeed, pernicious – than her routine peddling of the lie that Iranian president Mahmoud Ahmadinejad has  said that "if he has a nuclear weapon he will use it to wipe Israel off the face of the earth. He will use it against the United States of America." (This is far from her only venture into idiocy.)

Iran has said that it is not developing a nuclear weapon, and quarterly inspections by the International Atomic Energy Agency support this claim. Moreover, two National Intelligence Estimates, compiled in 2007 and 2011 by America’s dozen and a half intelligence agencies, say Iran stopped work on a nuclear weapon in 2003. Finally, according to Wikipedia:


On ideological grounds, a public and categorical religious decree (fatwa) against the development, production, stockpiling and use of nuclear weapons has been issued by the supreme leader of the Islamic Republic Ali Khamenei along with other clerics, while it is supported by others in the religious establishment.

(As president Ahmadinejad has no authority over Iran’s military.)

Bachmann of course has zero chance of getting the Republican presidential nomination, but her repetition of this vicious lie could be effective in scaring the American people into supporting the other forces drumming up support for war against Iran. These include the neoconservatives, Israel, and the Israel lobby.

Bachmann should be challenged on this matter at every opportunity. It is disgraceful that she was allowed to get away with her reckless statement at the debate the other night. But who’s surprised? Wolf Blitzer, the Heritage Foundation, and the American Enterprise Institute would all love to see a war with Iran.
Posted by Sheldon Richman at 7:23 AM 19 comments

The Arrogance of Power

Last night’s Republican presidential debate demonstrates yet again that one will never think sensibly about the safety of the American people until one acknowledges that the U.S. government has perpetrated, directly and indirectly, a long train of atrocities from the Americas to the Far East. (Behold the latest example.) Hosannas about “American exceptionalism” and the “greatest nation in the history of the world” sound like desperate attempts at self-reassurance in light of this shameful history.
Posted by Sheldon Richman at 12:03 PM 0 comments

UC Davis Brutality from Another Angle

Posted by Sheldon Richman at 6:26 AM 0 comments

Posted by Sheldon Richman at 6:23 AM 0 comments

Journalist Sam Husseini has been suspended from the National Press Club for allegedly violating its rule against “boisterous and unseemly conduct or language.” What did he do?

He asked the following of Prince Turki al-Faisal al-Sa'ud of Saudi Arabia:


There's been a lot of talk about the legitimacy of the Syrian regime, I want to know what legitimacy your regime has, sir. You come before us, representative of one of the most autocratic, misogynistic regimes on the face of the earth. Human Rights Watch and other reports of torture detention of activist, you squelched the democratic uprising in Bahrain, you tried to overturn the democratic uprising in Egypt and indeed you continue to oppress your own people. What legitimacy does you regime have -- other than billions of dollars and weapons?

Read more »
Posted by Sheldon Richman at 10:43 AM 0 comments

Regarding that IAEA Report on Iran’s Alleged Nuclear Weapons Program

The war drums are getting louder in the wake the International Atomic Energy Agency’s latest report on Iran’s alleged nuclear weapons program. But how significant is the report?

This is from investigative reporter Seymour Hersh of The New Yorker:

Today’s TGIF examines the political thought of the likes of Rachel Maddow:


Progressives today say people should come before profits. Now in a privilege-ridden corporate state, that’s a worthy goal, though Progressives have no clue how to achieve it. How nice it would be if they were equally committed to putting people before bureaucracy. Here they fall down rather badly because their signature ideas would subordinate regular people to the dictates of the power structure.

Read it here. Reason.com is now posting TGIF. You can see the latest here.
Some other recent writings:
TGIF: “Back to Basics” – No volition, no discourse. No discourse, no denying volition. Ergo volition.
Op-ed: “What Immigration Problem?”

Posted by Sheldon Richman at 9:56 AM 2 comments

I’m Talking about You, Romney

Any presidential candidate who threatens to attack Iran if elected is a monster. Nothing could be more reckless or despicable than to promise to carry out a policy that would kill thousands of innocent people, set the Middle East afire, and invite retaliation against Americans—all in an effort to gain political power by showing how tough he can talk. Romney did this the other night, showing what an evil man he is.

I suppose we’ll hear the same bullshit from Gingrich, Cain, Perry, Bachmann, and Santorum if we haven't already. What a contemptible bunch of reprobates. I’m glad Ron Paul is there to provide some rationality.

Close Enough for the Politicians

The armistice between the Allies and Germany was signed a little after 5 a.m. on Nov. 11, 1918, but wasn't to take effect until 11 a.m. Meanwhile men continued to kill and die. "Canadian Private George Lawrence Price is traditionally regarded as the last soldier killed in the Great War: he was shot by a German sniper at 10:57 and died at 10:58." --Wikipedia
Posted by Sheldon Richman at 6:57 AM 2 comments

The U.S. government says it expects Iran to fulfill its IAEA (International Atomic Energy Agency) obligations. And what about Israel? Oh, that's right. It has no IAEA obligations -- unlike Iran, it never signed the Nuclear Non-Proliferation Treaty and is not subject to inspections, despite its possession of a few hundred nukes.

Posted by Sheldon Richman at 7:22 AM 0 comments

My output this week dealt with Occupy Wall Street:
Enjoy!
Posted by Sheldon Richman at 7:19 AM 0 comments

Barack Obama Is Not the Most Dangerous Person in the World

This man is. From Sky News:


Israeli Prime Minister Benjamin Netanyahu is trying to rally support in his cabinet for an attack on Iran, according to government sources.

The country's defence minister Ehud Barak and the foreign minister Avigdor Lieberman are said to be among those backing a pre-emptive strike to neutralise Iran's nuclear ambitions.

But a narrow majority of ministers currently oppose the move, which could trigger a wave of regional retaliation.

The debate over possible Israeli military action has reached fever pitch in recent days with newspaper leader columns discussing the benefits and dangers of hitting Iran.

Mr Lieberman responded to the reports of a push to gain cabinet approval by saying that "Iran poses the most dangerous threat to world order."

Read more »
Posted by Sheldon Richman at 8:11 AM 0 comments

Would Bernie Madoff's prospective victims have been better or worse off had they lived in a world with no government oversight of investment matters whatsoever?
Posted by Sheldon Richman at 9:47 AM 1 comments