Earth to Jewish Lobby: Are You There?

The Gazans are penned up like animals, easy targets for the powerful IDF, and people talk of Israel's adversity!

Posted by Sheldon Richman at 9:25 AM 3 comments

Israeli Assault on Gaza Has No Basis in Self-Defense


By 2004 Prime Minister Ariel Sharon had become convinced that the economic and military costs of continuing to defend the settlements were too high—unlike the case of the West Bank and Jerusalem, Israel had little or no religious or nationalist claims on Gaza—so in August 2005 he ordered their withdrawal. Even after the withdrawal, Israel continued to wield overwhelming power over Gaza’s economy and external trade; it maintained control of Gaza’s water, electricity, and telecommunication networks; refused to allow Gaza a functioning airport, seaport, or commercial crossing on its border with Egypt, thus radically cutting Gazan trade and commerce with the outside world; restricted the movement of people and goods in and out of Gaza; prevented farmers from tending to and harvesting their fields and crops; placed severe restrictions on the importation of water for drinking as well as irrigation purposes; and re- served the “right” to launch military incursions at will, periodically bombing and shelling Gaza’s electrical generating system, roads, bridges, farms, and olive orchards. Consequently, even before Cast Lead, the Gazan economy was on the verge of collapse; nearly 95 percent of all factories operating in Gaza had closed down; unemployment ranged from 45 to 60 percent; and 80 percent of Gazans were estimated to be below international poverty lines. Outright starvation was averted by outside assistance, but malnutrition was rampant; the minimal imports of food supplies allowed by Israel were carefully calibrated to prevent a famine, but not more than that.

Read this important article to understand the background of what's going on today. Gaza has has been under Israeli oppression since 1967. One can disapprove of the Gazans' particular tactics (lobbing rockets at civilian areas) while acknowledging that resistance to occupation is legitimate both morally and in international law. When you place people in a desperate position, you can't be surprised when they use any weapons they can get their hands on. The disparity in power and casualties between the Israelis and Gazans (and Palestinians in general) is too obvious to require elaboration.

Slater's paper is also crucial to understanding Israel's long-executed policy of targeting noncombatants and civilian infrastructure, not only  Palestinians, but also Egyptians and Lebanese too. When Israel's Labor Party criticized Menachem Begin's Likud government for targeting noncombatants in Lebanon in 1981, Begin responded by documenting similar conduct by Labor governments. No one denied Begin's counterclaim.

This is what we're dealing with--and Americans are forced to pay for it.

Posted by Sheldon Richman at 8:45 AM 0 comments

Now at The Future of Freedom Foundation's new website!
Posted by Sheldon Richman at 11:43 AM 0 comments

From Jerry Haber at The Magnes Zionist:


I spoke with an expert on the Israeli military shortly after "Operation Cast Lead," and when I told him that many argued that the operation was a reaction to Hamas rocket-fire, he laughed. He said that Hamas rocket-fire was deliberately provoked when Israel broke the cease-fire so that Israel could do a little "spring cleaning," deplete Hamas's arsenal of weapons. He told me that this happens every few years, and that I should expect it to happen in another few years. Israel will assassinate a Hamas leader, Hamas will have to respond (wouldn't Israel, under those circumstances?) and Israel will perform a "clean up" operation.

Also from Haber: "And That's Why Israel Doesn't Want A Cease-Fire."
Posted by Sheldon Richman at 11:19 AM 0 comments

The Attack on Gaza

Two points to keep in mind as this latest Israeli aggression unfolds:

First, Hamas did not start the last flare-up in violence. See John Glaser's "Israel’s Latest Assault on Gaza: The Lie of Who Started It."


Baskin told Haaretz on Thursday that senior officials in Israel knew about his contacts with Hamas and Egyptian intelligence aimed at formulating the permanent truce, but nevertheless approved the assassination."

I submit that Jabari's willingness to talk true and his assassination are no coincidence. Israel does not want to see Hamas evolve. It needs an enemy.

More things to keep in mind:

Gaza has been under an Israeli blockade for years. Needed goods are kept out.

Israel helped to make Hamas what it is today. Years ago it promoted the organization as an alternative to the secular Fatah. Why? To splinter the Palestinians. If Israel now considers Hamas a mortal threat, it has only itself to blame. This is a case of blowback.

Israel's partisans refer to Hamas's declaration of war on Jews in its charter as a reason for scoffing at the idea that real negotiations are possible with the organization. That charter may be put in perspective by noting the words of David Ben-Gurion, Israel's founding prime minister:

All Zionist leaders were aware of that fact.

Nevertheless, Hamas has distanced itself from the charter and has shown a willingness to talk, as we've seen.The Israeli response has been assassination, bombing, and ground invasion. It is not Hamas that has consistently violated cease-fires.

Finally, one need not condone the shooting of rockets into southern Israel to care about the context. In 1948 Zionist paramilitary forces drove Palestinians out of their villages in the south and pushed them into the Gaza Strip. Many Gazans are refugees or descendants of refugees of the Nakba. The violence may be inexcusable, but it is not unprovoked.

See this roundup of the violence from Mondoweiss.
Posted by Sheldon Richman at 10:34 AM 0 comments

Opting Out of the State

The freedom to opt out means that no one can force you to participate in any government activity that you object to.... This would not get rid of the government immediately, as we market anarchists would like. But it would sure beat the hell out of what we have now.

Read my full op-ed at the Center for a Stateless Society.
Posted by Sheldon Richman at 7:54 AM 0 comments

Labels: Center for a Stateless Society, opting out, the state
Email ThisBlogThis!Share to TwitterShare to FacebookShare to Pinterest 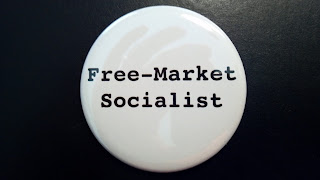 Self-Ownership and the Right to Property

"Is Property Theft?" is an updated version of Less Antman's great article on property. I urge everyone to read it. Well, what are you waiting for?
Posted by Sheldon Richman at 8:11 AM 0 comments

Labels: property
Email ThisBlogThis!Share to TwitterShare to FacebookShare to Pinterest

Left-Libertarians at the Mic

The wonderfully talented Stephanie Murphy managed to get Roderick Long, Charles Johnson, Gary Chartier, and me together in one place at October's Libertopia. The result was this interview.
Posted by Sheldon Richman at 1:43 PM 0 comments

I take on the broken-window fallacy, which was committed many times in the wake of Hurricane Sandy, at the Project to Restore America website: "A Flood of Fallacies."
Posted by Sheldon Richman at 1:41 PM 0 comments

What I have to say about the presidential election I said here. So I will leave it at that.

I do wish to recognize four good outcomes: the legalization of marijuana in Colorado and Washington, and the legalization of same-sex marriage in Maine and Maryland. Of course, these are not pure libertarian solutions--none of these things should require the voters' approval--but some people in those states will be freer as a result of the election.
Posted by Sheldon Richman at 1:37 PM 0 comments

Labels: election
Email ThisBlogThis!Share to TwitterShare to FacebookShare to Pinterest

A Vote Is a Terrible Thing to Waste

A vote is a terrible thing to waste, so I'm going to preserve it by staying home tomorrow
Posted by Sheldon Richman at 9:39 AM 3 comments

Labels: democracy
Email ThisBlogThis!Share to TwitterShare to FacebookShare to Pinterest

The Anniversary of an Imperialist Act that Still Plagues Us


Ninety-five years ago . . . , on November 2, 1917, British imperialism in Palestine began when Lord Balfour, the then British foreign secretary and former prime minister, sent a letter to Baron Rothschild, one of the leaders of the Zionist movement. This letter became known as the “Balfour Declaration”.

In that letter, Balfour promised British support for the Zionist programme of establishing a “national home for the Jewish people” in Palestine. This pledge of support was made without consulting the indigenous Christian and Muslim inhabitants of Palestine, the Palestinian people. And it was made before British troops had even conquered the land.

Balfour, on behalf of Britain, promised Palestine – over which Britain had no legal right – to a people who did not even live there (of the very small community of Palestinian Jews in Palestine in 1917, very few were Zionists). And he did so with the worst of intentions: to discourage Jewish immigration to Britain. No wonder Lord Montagu, the only Jewish member of the Cabinet, opposed the declaration.

And yet, just two years earlier, Britain had committed herself to assisting the Arab nations in achieving their independence from the Ottoman Empire. [Emphasis added.]

What followed was a monstrous injustice committed against the Palestinians--the Nakba--set in motion by this British act. The Palestinians have suffered terribly at the hands of those who were intent on founding the Jewish state of Israel no matter the cost--to the Palestinians. And the rest of the world has lived with the turmoil--the constant threat of war and economic disruption--bequeathed by the British imperialists ever since.  Most of the men responsible for this crime probably died peacefully in their sleep. Justice is not guaranteed in our world.

I'm thrilled with the appointment and look forward to working for liberty and peace full time with Jacob Hornberger and his great organization. I've been closely affiliated with FFF since 1993. Now we kick that up several notches.

Posted by Sheldon Richman at 11:33 AM 5 comments