Hot off the Press! Enough Already: Time to End the War on Terrorism 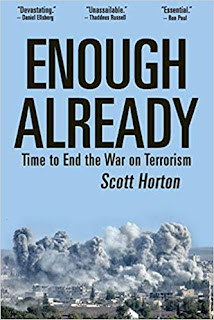 It my supreme pleasure to announce the availability of Scott Horton's great new book, Enough Already: Time to End the War on Terrorism. This encyclopedic work is available in paperback and Kindle format at Amazon and contains pretty much all you need to know about the lethal, corrupt, and counterproductive series of wars and imperial actions that still plague the world.
And don't forget Scott's previous indispensable book, Fool's Errand: Time to End the War in Afghanistan.

Posted by Sheldon Richman at 9:19 AM 0 comments

A Defense of the Peaceful Transfer of War-Making Power

Prussian general and military theorist Carl von Clausevitz famously said that "war is a continuation of politics by other means." I think we can reverse this: politics is war by other means. The ultimate aim of politics (in the narrow sense of the word; there's a more elevated philosophical sense) is what Frederic Bastiat called "legal plunder."

Other thinkers have elaborated this idea. Franz Oppenheimer's book The State comes to mind. Oppenheimer influenced Albert Jay Nock, Frank Chodorov, Murray Rothbard, and through them the modern libertarian movement. Oppenheimer distinguished work -- which he called the "economic means" -- from robbery -- the "political means."

A gang can raid a group of productive people, steal their stuff, and ride off to the next community to plunder anew. Or it can stay around and keep looting the same people. Now people tend not to like this and won't be terribly productive. So to pull this off, the gang will need to convince the people that the arrangement is for their own good. The gang will promise to protect them from other gangs (which it will surely want to do) and provide other services that will tend to keep the people quiescent. The booty they will be deprived of will be relabeled taxes.

To sell this set-up to the people, the gang will need intellectuals or priests to formulate a religion, ideology, or what-have-you to persuade the people that this is all for their benefit. Why? Because rebellion is costly to rulers. For one thing, people who are busy resisting tyranny won't be producing stuff, which would undercut the point of politics: legal plunder. Better for the rulers, therefore, that the people (at least tacitly) consent to or acquiesce in the arrangement after being encouraged to believe that they are net beneficiaries, despite the palpable costs. Controlling education is useful in this regard.

So we might well look on politics as war on productive people by other means.

This has implications for the revered idea of the peaceful transfer of power, which is much in the news these days. The power that is to be peacefully transferred is the power to make war both domestically and internationally.

Does this mean that we ought to denigrate the peaceful transfer of power? No, of course not. Political power is properly and always an object of suspicion and (one hopes) diminution, but that is no justification for violent transfer. Violence embodies its own intrinsic evils and cannot be controlled or finely targeted. Collateral damage is the rule, not the exception. Moreover, violence will usually result in far worse state abuses -- with the support of most people, who will abhor civil disorder.

When President Woodrow Wilson and his Progressive supporters pushed for U.S. entry into the Great War, Randolph Bourne broke with his former allies and eloquently opposed their crusade. What especially irked Bourne was the Progressives' argument that entering the war would advance their reform agenda.

Bourne disagreed: "He who mounts a wild elephant goes where the wild elephant goes." Of course, Bourne is also the one who wrote that "war is the health of the state." Both quotations argue against violence as a means of social change. Even in the face of tyranny, we should favor a presumption of nonviolence, or what Bryan Caplan calls "pragmatic pacifism." (Also see this.)

The methods of nonviolent resistance have long been fleshed out by Gene Sharp. (See Carl Watner's "Without Firing A Single Shot: Voluntaryist Resistance and Societal Defense.")

Posted by Sheldon Richman at 7:35 AM 1 comments

Why Politics Is So Acrimonious

If we wish to understand what's wrong with today's politics, we ought to consider something F. A. Hayek pointed out long ago. It should have been obvious, but it escapes many people: namely, the more power government officials have over our lives, the more people will fear its falling into the "wrong" hands, that is, the hands of those who disagree with them. In response to a growing fear, they will be willing to undertake ever-more-extreme measures to wrest power from those hands or retain it for the "right" hands.

Who can deny this? Government is force. It is imposition -- not merely on people who really abuse others, but also on perfectly innocent people who mind their own business. Since that is so and since few people like having things jammed down their throats, as government officials control more and more aspects of life, including and perhaps especially cultural matters (through schooling, for example), people realize they have two only choices: be a victim or be an aggressor. Many people will choose the latter and be willing to go to great lengths, even street violence, to protect themselves and their families. (Note well: This is not an excuse for violence.)

If you wonder why zero-sum politics has become so acrimonious, therein lies a clue. (Other factors may explain the timing, etc.) You want less acrimonious politics? Strive for less politics. And that means replacing government with freedom, consent, and markets. We really have no other choice.

Posted by Sheldon Richman at 9:51 AM 0 comments

The coverage of the riot at the U.S. Capitol last week was annoying to say the least -- what went on was no insurrection or attempted coup; it was just an end-in-itself temper tantrum committed by a bunch of idiots who never believed after Nov. 3 that they would actually prevent Joe Biden from being inaugurated at noon on Jan. 20.

Perhaps most annoying of all about the coverage was the barely veiled premise that the Capitol is a temple on sacred ground. Let's not fall for that nationalist bunk. I find it ironic that those who speak in such tones say they oppose nationalism, which is nothing but a body of state-worshiping dogma, sacraments, and rituals. They just don't like a particular branch of the church, that's all. So what's new?

Let's be clear: there is no sacred ground or holy buildings. The posers who are called "representatives" and who occupy such places have no more access to the Will of The People than the high priests had to Yahweh back in the day.

But okay, if we must use such honorifics, let's at least reserve them for justly acquired private property. (There is such a thing, and it rules out acquisition through government privilege.) After all, in theory (though not in reality), democracy is said to exist for the sake of people (not the people). And people, being mortal and individual, can neither flourish nor cooperate with others without being able to acquire and control parcels of land and objects. The only rule must be that you do so justly, that is, without violating the same rights of others. This comes down to a prohibition on the initiation of force. (I say plenty about this in What Social Animals Owe to Each Other, available at a Libertarian Institute near you.)

So, again, if we have to talk in such terms -- and really we don't -- Starbucks and the corner hardware store are more sacred than any government building, which was built with the proceeds from extortion, otherwise known as taxation. This doesn't justify or excuse what Trump's infantile horde did on Jan. 6, but it's a fact nonetheless.
Posted by Sheldon Richman at 10:49 AM 3 comments