Scott Horton interviewed me about Coming to Palestine. Listen here.
Posted by Sheldon Richman at 10:35 AM 0 comments

From Rabbi Elmer Berger's A Partisan History of Judaism: The Jewish Case against Zionism (1951):


Judaism evolved from a primitive tribalism to as noble a spiritual and universal vision as man has ever attained. This fact attests, even without detailed proof, to the truth that "unity" and segregation may have had their partisans but that there must also have been undiscourageable partisans of another kind through the long history of Jews and Judaism.

For change and evolution rarely, if ever, are born from uniformity. Uniformity is imposed, as our modern world knows, in order to suffocate rather than encourage growth. That the history of Judaism reveals such growth is proof of disunity, of individualism, of liberalism, and of respect for these things in whatever degree necessary; to have accepted their achievements and grafted them into the organism of Judaism itself.

But the important fact remains that always, among both Jews and those of other faiths, there were those who respected the individual integrity of people of Jewish faith and the transcending, universal values of Judaism....

For people other than Jews to resist the apparent prevalence of "Jewish" nationalism and affirm that Judaism is a highly personalized conviction about God, the universe, and mankind is not, therefore, to violate either the feelings of Jews or the traditions of Judaism....

In plain English, to oppose Jewish separatism and segregation in our national life, except in the field of religion, is not the equivalent of anti-Semitism.

Is the Bible a Title Deed?

I was asked on Facebook, "What is your response to many Jews and Christians who believe the Bible makes it clear that the land belongs to the Jews?" Here's is my (slightly edited) response:
None of these points are original with me (they are well-documented most recently by Shlomo Sand), and all this is discussed in my forthcoming book, Coming to Palestine.
Posted by Sheldon Richman at 11:21 AM 0 comments

Posted by Sheldon Richman at 8:15 AM 46 comments 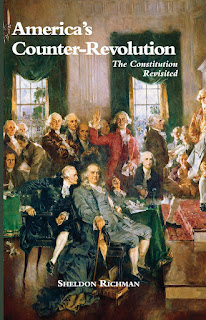 On this Constitution Day, may I modestly suggest the perfect gift for your loved ones?

Posted by Sheldon Richman at 11:52 AM 0 comments 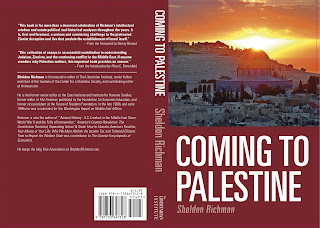 I was interviewed about my forthcoming book, Coming to Palestine (Libertarian Institute). Listen here and watch for news of the book's release.
Posted by Sheldon Richman at 10:56 AM 0 comments

Judaism, Zionism, and the Dual-Loyalty Charge

Zionists, that is, Jewish nationalists, who hold that Jews qua Jews constitute something more than a religious community, open themselves up to the dual-loyalty charge. And that is exactly what the majority non-Zionist Jews warned against from the start.


It’s particularly ironic that Zionists should be making this charge [that dual loyalty is an anti-Semitic trope]. When [Howard] Lovy (along with many others...) refers to the “ancient specter of Jewish disloyalty”, I take it he means in particular the standard anti-Semitic charge during the 18th and 19th centuries in Europe over the Emancipation of Jews from the ghettoes and their integration into civil European society as full citizens with full rights. Anti-Semites considered Jews a nationality, a people, a race, and as such they could never be truly assimilated into European society. The liberal democratic argument in response was to say that Jews can just as much be English, French, German, etc. as members of any other religious community. French Jews, on this view, are as legitimately considered full French citizens as French Catholics and Protestants. Judaism is a religion, not a nationality.

But of course Zionism was founded on the Romantic nationalist idea that Jews really are a people apart from other peoples, and so historically shared a general outlook on the question of the relations between collectives and individuals with the right-wing and anti-Semitic camps. Yes, we are a people apart, argued the Zionists, and that’s why we deserve to have a homeland and state of our own. That this position leads inexorably to worries about “dual loyalty” is evident from the response to Zionism in the late 19th and early 20th centuries from leaders of the Jewish community throughout Europe and the US that the doctrine of Jewish nationhood is extremely dangerous for the position of Jews in these countries. They flat out rejected the Zionist-nationalist framework largely because it did rationalize the charge of dual loyalty. So, for Zionists and their supporters to now trot out this charge of anti-Semitism in the guise of “dual loyalty” is hypocritical and cynical.

So let's have no more of this hypocrisy, okay?

NOTICE: Watch for my new book, Why Palestine Matters, from The Libertarian Institute.

Posted by Sheldon Richman at 9:25 AM 1 comments