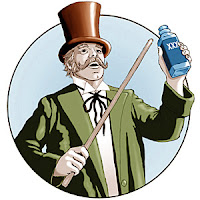 All I can say is, we’ve got a hell of a political system on our hands when the surest way for a president to win the adoration of those who thought him a dangerous, ignorant, narcissistic, erratic, and bullshitting blowhard yesterday is to drop a bomb or fire a cruise missile today.

Posted by Sheldon Richman at 5:06 AM

If bombs are not droped, then there is no more room left to store new bombs. Then, the new bombs will be bought by someone else, like the Eskimos, who believe that all southern peoples are lazy and evil and ugly and deserve to die. And I can't fid arguments against such powerful line of reasoning.
Therefore, we have to make sure no weapon reaches the hands of our enemies: the northern peoples beyond the Wall. And if we have to have perpetual war amongst us, so be it.

From a reason.com piece you wrote, "How refreshing it would be for someone to set forth the strongest case for libertarianism before attempting to eviscerate it. Is the failure to do so a sign of fear that the philosophy is potentially appealing to a great many people?"

My friends and I would really like to debate a worthy libertarian opponent who can actually make a strong case in favor of libertarianism, but we cannot seem to find one. We were hoping to find someone at least as principled as Rothbard, but we have found no one of the sort, and with such unworthy opponents, our attack is also weak -- namely, that our opponents seem unwilling to live up to any of their own stated ideals and, furthermore, that they actively fight against people who are indeed fighting for specific causes of an allegedly libertarian nature. For example, we haven't found a single libertarian, as of yet, who is willing to take up the cause of fighting chattel slavery, even when only minimal efforts are requested, and we've found a number who consider even stating that chattel slavery still exists in the world to be an attack against libertarianism. We would welcome the opportunity to talk to a more competent opponent.

"we've found a number who consider even stating that chattel slavery still exists in the world to be an attack against libertarianism." I can't imagine any libertarian taking this position.