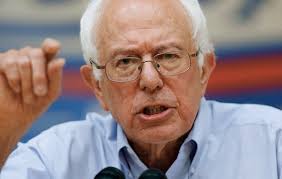 During his interview with the New York Daily News, Bernie Sanders was asked to specify the fraud committed by Wall Street banks. He replied:

Selling products to people who you knew could not repay them. Lying to people without allowing them to know that in a year, their interest rates would be off the charts. They would not repay that. Bundling these things. Putting them into packages with good mortgages. That's fraudulent activity.

Does Sanders really forget that it was progressives like him who demanded that banks lower lending standards so that low-income people with no, weak, or bad credit histories could get mortgages with low teaser interest rates that would later balloon? Is he ignorant of the fact that these banks had every reason to believe the government would bail them out if they failed? Does he not recall Fannie Mae and Freddie Mac, the government-sponsored enterprises championed by Barney Frank and other progressives, that were right in the middle of this action, knowing they'd be saved if they failed? Has Sanders no memory of mortgage lenders like Countrywide, which were celebrated by progressives for aggressively pushing mortgages on people who could not afford them? Is he unaware that HUD, under Bill Clinton (and Secretary Andrew Cuomo) as well as George W. Bush, enabled people with poor credit and low incomes to "buy" houses with little or no down payment? And finally, is he oblivious of the fact that it was all these government-pushed shaky mortgages that were bundled into the exotic investment instruments Sanders now decries?

I'm pretty sure Sanders is aware of all this. But it doesn't fit his narrative that the Great Recession was entirely the result of private-sector greed, so he can't acknowledge it. Wall Street is properly viewed with suspicion, but what makes that reasonable is that it has long been in cahoots with the national government, notably with federal deposit insurance, which rewards irresponsibility by relieving depositors of the need to judge banks' sobriety or lack thereof.

In other words, Sen. Sanders, Wall Street couldn't have done it alone. It needed people like you.

Sheldon Richman, author of America's Counter-Revolution: The Constitution Revisited, keeps the blog Free Association and is a senior fellow and chair of the trustees of the Center for a Stateless Society, and a contributing editor at Antiwar.com. Become a Free Association patron today!

Posted by Sheldon Richman at 8:09 AM

Bernie neglects to mention the biggest fraud is the $3 billion hidden
daily in the auctions of Treasury securities with the FRBNY using
their exclusive control of the accounts. Ref: https://www.scribd.com/doc/153024003/
Amended-Complaint-Federal-Reserve-whistleblower

Good article, but did you really mean to write this? [emphasis added] "But it doesn’t fit his narrative that the Great Recession *was* entirely the result of private-sector greed, so he can’t acknowledge it." Seems to me that that is exactly what Sanders' narrative is.

Yes, I meant to write it. What's wrong with it? He can't talk about the government's prominent role because that would contradict his pure greedy private-sector story.

I've never quite understood why home ownership is so prominent in the democrats platform. Let me get this straight... EVERYBODY should own quite possibly the most expensive thing (by at least an order of magnitude) that a typical human being can own -- the product of literally hundreds of other people's labors.

Yeah, we should all get one of those. Make it happen, banks.