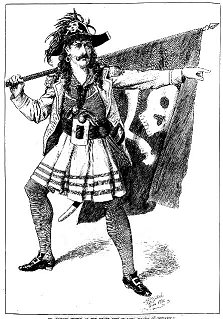 Seeing as today is February 29, we should ruminate on this odd practice of adding a day to the calendar every fourth year. In that spirit, I turn to William Schwenck Gilbert, who took up the matter in his and Sir Arthur Sullivan’s opera The Pirates of Penzance. The background to this song is the Pirate King’s wish to inform his apprentice, young Frederic, that since he was born on February 29, he was not, as he thought, 21 and hence eligible release from his pirate apprenticeship, but in fact only “five and a little bit over.”

For some ridiculous reason, to which, however,
I've no desire to be disloyal,

Some person in authority, I don't know who,
very likely the Astronomer Royal,
Has decided that, although for such a beastly month as February, twenty-eight days as a rule are plenty,
One year in every four his days shall be reckoned as
nine and twenty.
Through some singular coincidence -- I shouldn't be surprised if it were owing to the agency of an ill-natured fairy --
You are the victim of this clumsy arrangement,
having been born in leap-year, on the twenty-ninth of February;
And so, by a simple arithmetical process, you'll easily discover,
That though you've lived twenty-one years,
yet,  if we go by birthdays,
you're only five and a little bit over!

FRED. Dear me! Let's see! (counting on fingers) Yes, yes; with yours my figures do agree!

FRED. (more amused than any) How quaint the ways of Paradox!
At common sense she gaily mocks!
Though counting in the usual way,
Years twenty-one I've been alive,
Yet, reckoning by my natal day, I am a little boy of five!

Posted by Sheldon Richman at 8:34 AM

Labels: Gilbert and Sullivan, Leap Year, The Pirates of Penzance
Email ThisBlogThis!Share to TwitterShare to FacebookShare to Pinterest

If you're going to ruminate about odd practices, do explain why most Americans insist on stating dates as February 28, 2012 as at the top of your blog, when most other societies use 28th February 2012 (and a few 2012-2-28). It's interesting that the Declaration of Independence used July 4, 1776 (unless it's photoshopped :-) or added after the fact), but the Bill of Rights uses the more sensible "fourth of March." Or why do most Americans insist on using such quaint measures (as in "hard to remember conversion factors") as pints, quarts, miles, etc.?

I guess it's because you've grown used to them. I can never remember how many feet/yards to a mile, but I do remember the conversion factor of miles to km (1.68) and I can tell how big an inch by reference to cm, but can never remember or have a good reference for the liquid/volume measures. Do you know how many cubic inches in a gallon? I never knew it until now that I looked up "gallon", but it's so much easier to remember 1000 cc in a litre (note: I've lived in the U.S. for many years but the measures sound alien).

It is the fault of whoever designed the solar system and caused the Earth to make a revolution around the Sun in approximately 365days and 6 hours, i.e. we drop behind the year by 1/4 per year and the leap day lets us catch up. Since this is not exact, we skip the leap day in the last year of a century (e.g. 1900) unless the year number is divisible by 400, i.e 2000, 1600 etc. Poor Frederick indeed. On Leap Day in 1940, the New York Times marked the end of his indentures. I too find the Imperial measures weird.