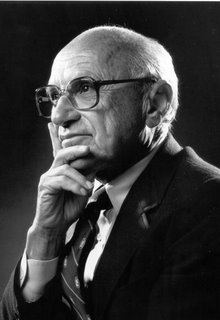 Milton Friedman was the most prominent voice for individual liberty and free markets in my lifetime. I disagree with some of his positions and foundational thinking on economic theory, but there is no denying that for the last half-century, he did more to bring the case for freedom to the public than anyone. He was a beacon, an inspiration to young libertarians and others.

My tribute to Friedman, co-written with Richard Ebeling, is here at the Foundation for Economic Education website.

P.S.: One cannot overstate how important Milton Friedman was in the battle to end conscription during the Vietnam War, both in public and behind the scenes. Many are in his debt without knowing it.


Posted by Sheldon Richman at 9:59 AM

And what do you think about his support for Pinochet?