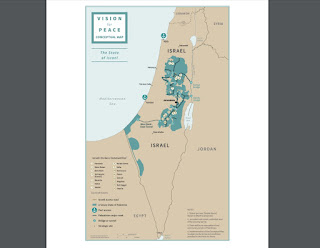 The fundamental flaw at the heart of Trump’s Palestine/Israel plan, presumptuously titled Peace to Prosperity: A Vision to Improve the Lives of the Palestinian and Israeli People, is that Trump -- like his predecessors -- believes that the Israelis are the aggrieved party and the Palestinians are the not-fully-human aggressors inherently unworthy of even the minimum trust accorded fellow human beings. You can see this premise throughout Trump’s corrupt blueprint for the future of Israel and Palestine.

But this premise has the aggressor and the victim roles switched in defiance of the facts. The Palestinians are the aggrieved party. They were dispossessed in 1948 and 1967 and then denied full and equal rights within Israel and all rights in the occupied West Bank and Gaza Strip. We see Trump’s attitude in a key part of Peace to Prosperity, namely, section seven on security and the associated appendices.

Before we get to that, let’s start by recognizing that although Trump brags that the Palestine he envisions would be bigger than what the Palestinians now control under the Oslo Accords, he is blowing hot air in his typical way. The Palestinians control nothing. Whatever internal security the Palestinian Authority (PA) administers in part of the West Bank is merely the result of Israel having subcontracted to the Palestinian elite the dirty internal-security work that Israel used to have to do itself. But Israel is free to override the PA whenever it sees the need and take internal security into its own hands. This is not autonomy.

So if Palestinian control is to be doubled, as Trump says, it would be a doubling of zero. Moreover, as Jonathan Cook writes, Trump’s plan misleads when it touts that Palestine would consist of 70 percent of the lands Israel has (illegally) occupied since the 1967 war. Several decades ago the main Palestinian organization and spokespeople agreed to reduce their claim to only the occupied territories, a mere 22 percent of the Palestine they had inhabited for millennia. That stunning concession never got the notice is deserved. (Only Israeli “concessions” are described as generous.) Yet Trump is demanding that the Palestinians accept only 70 percent of the 22 percent -- which comes to 15 percent of the original territory the Israelis (that is, Zionists) took by force in what is called the Nakba, or catastrophe. And, Cook adds, that’s “after Israel has seized all the best agricultural land and the water sources.”

The security section and associated appendices make clear that in Trump’s (and Jared Kushner’s and Benjamin Netanyahu’s) eyes, the Palestinians are the bad guys who deserve nothing less than the closest surveillance lest they commit mass murder because they (so it is alleged) hate Jews qua Jews. So, despite the apparent creation of a sovereign State of Palestine, the Trump plan in reality would create a gerrymandered archipelago of Palestinian towns that nevertheless would contain many "Israeli conclave communities" (see the map above) and be surrounded by the State of Israel. Palestinians would have highly limited home-rule, but ultimate control would remain with Israel. That state would have complete authority over Palestine’s borders, airspace, and even the electromagnetic spectrum. Palestine would have no access to the Jordan River, because Israel would annex the Jordan Valley (as it's about to do), or the Dead Sea. To quote the plan:

As you can see, any so-called concessions are for Israel’s convenience and not out of respect for the Palestinians’ long-denied rights.

But as we’ll see, those criteria are hardly objective and leave plenty of leeway for Israel to give Palestine a failing grade -- which is exactly what we can expect.

What a relief to know that Israel's security footprint will be reduced through Israeli aerial surveillance -- solely as determined by the State of Israel.

Let’s move on to the appendices, where some details are filled in.

Appendix 2C states that “Palestine will not have the right to forge military, intelligence or security agreements with any state or organization that adversely affect the State of Israel’s security, as determined by the State of Israel.” (Emphasis added.)

Israel of course would be free to make whatever agreement it likes, no matter how much it adversely affects the State of Palestine.

Moreover, a “demilitarized State of Palestine will be prohibited from possessing capabilities that can threaten the State of Israel."

That is obviously vague. Defensive (and deterrent) capabilities can be always be called threatening. Israel does this with Hezbollah in Lebanon all the time. I note for the record that Israel is not similarly “prohibited from possessing capabilities that can threaten” the State of Palestine.

Congruent with the above, “any expansion of Palestinian security capabilities beyond the capabilities existing on the date this Vision is released shall be subject to agreement with the State of Israel.” Thus the Israeli state would have to approve virtually any change inside Palestine because, after all, almost anything could be construed as related to Israeli security.

Now regarding those criteria:

The State of Palestine’s counterterrorism system must encompass all elements of counterterrorism, from initial detection of illicit activity to longtime incarceration of perpetrators. Included in the system must be: intelligence officers to detect potential terrorist activity, specially trained counterterrorism forces to raid sites and arrest perpetrators, forensics experts to conduct site exploitation, pretrial detention officers to ensure the retention of prisoners, prosecutors and judges to issue warrants and conduct trials, and post-trial detention officers to ensure prisoners serve their sentences. The system should include stand-alone detention facilities and vetted personnel.

I’m assuming, in light of Israel’s and the United States’ record in the matter, that "all elements of counterterrorism" include mass surveillance of all kinds, road checkpoints, torture, use of informants, and indefinite detention without charge, trial, or any reasonable notion of due process.
Just so the Palestinians are clear about what is expected of them, “the breadth and depth of the anti-terror activities of the State of Palestine will be determined [by Israel] by”:
Apparently, the Israelis will know the appropriate extent of all those things. But how? That’s not for us or the Palestinians to wonder about. But if the Palestinians fall short of expectations, you can bet the Israelis will maximize their “security footprint” inside the sovereign State of Palestine.
And speaking of vagueness, Palestine will be expected to “prohibit all incitement to terrorism.”

Considering what the Israelis have regarded as incitement in the past, this sounds as though the Palestinian government will be expected to limit free speech.

And just so there’s no misunderstanding:

During the negotiations the parties, in consultation with the United States, shall attempt to create acceptable initial non-binding metrics with respect to the Security Criteria that are acceptable to the State of Israel, and in no event less stringent than the metrics used by either the Hashemite Kingdom of Jordan or the Arab Republic of Egypt (whichever is stricter) with respect to the Security Criteria. Because security threats evolve, the metrics are intended to be used as a guide, and will not be binding. However, the establishment of such non-binding metrics will allow the State of Palestine to better understand the minimum goals they are expected to achieve, and take into account regional minimum benchmarks. [Emphasis added.]

It’s clear to see that Trump’s plan is all about Israel (and its American partisans) and has nothing whatever to do with the rights of Palestinians to control their own destiny. All considerations appear subordinate to Israel’s alleged security concerns, but in fact, what really counts (since Israel faces no existential threat) is a pseudo-ethnic chauvinism. (I write pseudo because Judaism is a religion, not an ethnic or racial group, that is embraced by people of many ethnicities. See my Coming to Palestine.)

The Palestinians just don’t count. To the extent they would get anything out of Trump’s plan, it is to save Israel some trouble. Better to have Palestine elite do Israel's dirty work.

TGIF -- The Goal Is Freedom -- appears occasionally on Fridays.

Posted by Sheldon Richman at 4:51 AM

Hey, Wow all the posts are very informative for the people who visit this site. Good work! We also have a Blog.Please feel free to visit our site. Thank you for sharing.
@ Local Packers And Movers Bangalore

Hello everyone am here to give a testimony of how Dr. OLU  herbal mixture saved my husband and I from shame and disgrace.
My husband and I were married for 5 years and no issue it was a really problem for me so a friend of mine told me about how Dr. OLU herbal mixture saved their marriage so I contacted him on his what's app number (+2348140654426) and he got back to me so I told him everything that is going on.  And he told me not to worry about anything, so he told me what to do and after i bought his products he told my husbands to use it for just one week and so we obeyed his instructions after using the product my husbands penis increased from 4 inches to 9 inches
I am happy to say i am now 3 mounts  pregnant and the weak erection problem stopped, me and my husband are now doing just fine, no more troubles. So I tell feel free to contact Dr. OLU  on his email (Drolusolutionhome@gmail.com) or what's app him on (+2348140654426)
Thank you sir you indeed saved my marriage

My mouth is short of words, i am so happy because Dr Obela has healed me from Herpes which i have been suffering from the past 5years now, i have spend a lot when getting drugs from the hospital to keep me healthy, i have tried all means in life to always become herpes virus negative one day, but there was no answer until i found Dr Obela the parish of African who provide me some healing herbs that i uses , now i am glad telling everyone that i am now Herpes Negative, i am very happy, thank you Dr Obela for helping my life comes back newly without any form of crisis, may the good lord that i serve blessed you Dr Obela and equip you to the higher grade for healing my life. i am so amazed. so i will announced to everyone in this whole world that is Herpes Virus positive to please follow my advice and get healed on time, because we all knows that Herpes disease is a deadly type, contact Dr Obela for your Herpes healing herbs today at: drobelaspellhome@gmail.com He will be always happy to assist you online and ensure you get healed on time, contact Dr Obela today for your healing herbs immediately, you can also add him on whatsApp +2348120189503............ THANKS TO DR OBELA