TGIF: Tribalism and Economic Nationalism - Cut from the Same Cloth 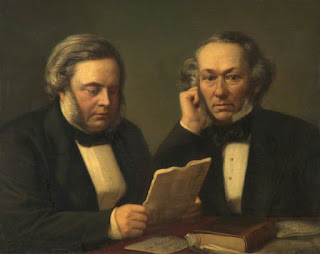 I have no idea what goes on in Donald Trump’s head, but I can imagine a connection between his refusal to renounce the support of alt-right white identitarians and his rejection of globalism — that is, the freedom of people to trade across national boundaries and to move, consistent with individual rights, as they see fit.


Posted by Sheldon Richman at 6:16 AM

Well, if nobody does the unpleasant business of returning our freedom of association, private property, and freedom of speech, then these kids start looking more and more right.

They could literally create a white ethnostate with freedom of association, and private property, but if they had had it all these years, I doubt they'd be so interested in doing so.

These statues coming down everywhere- they show us our institutions have been subverted. You put up statues, or build cities, assuming your posterity will continue to enjoy and maintain them. So maybe, since Trump wants major rebuilding, since he's a real estate guy himself, maybe some little part of his mind knows this. Nobody is going to build a Detroit now, knowing it's going to be trashed.

"create a white ethnostate with freedom of association, and private property"

Let them do it. It will collapse, just like all other forms of central planning.

Are we afraid that racists might prove a more resistant weed than communists?

What about black ethnostatists? They live in extreme poverty already. Why should it be different with other races?

A white ethnostate has nothing to do with central planning, especially when it is done by people with freedom of association and private property. They simply agree not to sell to people they don't want living there. It would be part of a contract or deed- no central authority needed.

Practically every bright idea in the libertarian space has failed for the same reasons. Enforced 'equality' kills libertarian cities too. The internet is filled with the wreckage of ten thousand great ideas, none of which we ever got to try.