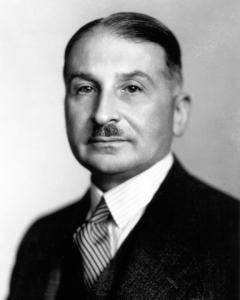 If Ludwig von Mises were alive today he would be viewing our current predicament with alarm but not surprise. He lived through something similar about a century ago.

In response to inexcusable police brutality, some outraged people who've taken to the streets have crossed the sacred line between peaceful protest and violence. Recent months have brought vandalism, arson, and injury in Kenosha, WI, and Portland, OR, and now intimidation of innocent bystanders in Portland and Washington, D.C. Now comes the ominous response.

This escalation by people who pose as friends of social justice (I don't doubt the sincerity of the nonviolent others in the streets) is both immoral and dangerous, both in its own right and also because it feeds those, like Trump, who might like nothing better than to bash a few heads before election day. Those among the protesters who perpetrate street violence are playing with fire, and they well know it, hoping that the state's reaction will serve their cause. But they are wrong. Whatever their cause, unless it's violence for its own sake, the result will be a strengthening of the worst aspects of the state--with the support of most people in the country.

Mises would have recognized what is going on because he'd seen it before. Have a look at chapter 10 of his book Liberalism, "The Argument of Fascism," for his observations in 1927 on what had taken place in Italy from about 1919 to 1922, when Mussolini took power and established a one-party dictatorship. That something even remotely similar to those events is now happening in America would have horrified and saddened him.

In that chapter Mises discussed the extended violent confrontation between communists/socialists and fascists in the streets of Italy. As the foremost champion of peace, freedom, and social cooperation (including economic exchange) of his day, Mises was horrified by the events. He noted that previously the antiliberal Italian right-wing nevertheless had reluctantly paid some slight homage to liberalism and its restraints on power, which it despised, because it was so central to Western civilization. But when the Italian Socialist Party began to achieve political success and make Bolshevik-type demands for fundamental social change, and when communists and socialist--emboldened by the state terror and mass murder in Russia--violently clashed in the streets with the right-wing "black shirts," Mussolini's budding fascist movement found their excuse to do what they had wanted to do all along: abandon token deference to liberalism, which it condemned as pacifist and weak, and embrace the so-called glory of violence without restraint. Mises wrote:

One must not fail to recognize that the conversion of the Rightist parties to the tactics of Fascism shows that the battle against liberalism has resulted in successes that, only a short time ago, would have been considered completely unthinkable. Many people approve of the methods of Fascism, even though its economic program is altogether antiliberal and its policy completely interventionist, because it is far from practicing the senseless and unrestrained destructionism that has stamped the Communists as the arch-enemies of civilization. Still others, in full knowledge of the evil that Fascist economic policy brings with it, view Fascism, in comparison with Bolshevism and Sovietism, as at least the lesser evil. [Emphasis added.]

Then Mises added, just so there would be no mistaking his meaning: "For the majority of its public and secret supporters and admirers, however, [Fascism's] appeal consists precisely in the violence of its methods." Fascism was antiliberal in every respect, Mises noted, including its nationalist and militarist foreign policy, which "cannot fail to give rise to an endless series of wars that must destroy all of modern civilization."

Mises pointed out that liberalism was not opposed to the use of violence when it was necessary to thwart violence. But again, to make sure he was understood, he quickly added:

What distinguishes liberal from Fascist political tactics is not a difference of opinion in regard to the necessity of using armed force to resist armed attackers, but a difference in the fundamental estimation of the role of violence in a struggle for power. The great danger threatening domestic policy from the side of Fascism lies in its complete faith in the decisive power of violence.

For Mises, the use of violence for the propagation of ideas was both wrong and counterproductive. Stifling the ideas of opponents gives them a credibility they might not otherwise earn: "Resort to naked force—that is, without justification in terms of intellectual arguments accepted by public opinion—merely gains new friends for those whom one is thereby trying to combat. In a battle between force and an idea, the latter always prevails."

Fascism can triumph today because universal indignation at the infamies committed by the socialists and communists has obtained for it the sympathies of wide circles. But when the fresh impression of the crimes of the Bolsheviks has paled, the socialist program will once again exercise its power of attraction on the masses. For Fascism does nothing to combat it except to suppress socialist ideas and to persecute the people who spread them. If it wanted really to combat socialism, it would have to oppose it with ideas. There is, however, only one idea that can be effectively opposed to socialism, viz., that of liberalism.

I will next reproduce the controversial conclusion to Mises's chapter; if I don't, someone else will:

It cannot be denied that Fascism and similar movements aiming at the establishment of dictatorships are full of the best intentions and that their intervention has, for the moment, saved European civilization. The merit that Fascism has thereby won for itself will live on eternally in history. But though its policy has brought salvation for the moment, it is not of the kind which could promise continued success. Fascism was an emergency makeshift. To view it as something more would be a fatal error.

No liberal--libertarian, that is to say--can read this with joy, but it would be unfair to interpret Mises, as some have tried, as harboring even a speck of illiberal sentiment. (See his 1944 book Omnipotent Government: The Rise of the Total State and Total War for his view of, among others, Nazi Germany. Mises, whose heritage was Jewish, had to flee Austria and then Europe altogether because of Hitler.) Look at things from Mises's vantage point: he saw horrendous violent clashes in the streets and the looming threat of a Bolshevik state in western Europe draped in the garb of universalism and egalitarianism. (In contrast, militant Italian nationalism hardly had universal appeal.) Liberalism, unfortunately, was not on the agenda. So he had to decide which was the greater threat to Western civilization--which side if triumphant would have a smaller chance of surviving beyond the short run. Let's not forget who was on the socialist side: people who were inspired by Lenin and Trotsky, architects of the 20th century's first one-party terror state. So who can say Mises was wrong? I can't.

Of course we're not living in analogous circumstances. Notwithstanding increasing hyperbole from both wings of the establishment, we don't face a choice between Bolshevism and fascism, although I am aware of Trump's authoritarian disposition and Biden's devotion to the all-service state. Still, it's too close for comfort. We now are now seeing violent street confrontations--and the potential for bystander casualties--between two sides each with a predilection for violence, even if neither one has a fleshed-out program. (Apparently, the clashes are an all-white affair.) If things get further out of hand, the public will likely and reasonably demand a restoration of order, and many in power will be only too happy to comply--and then some. What will come next?

I don't want to exaggerate--the worst incidents have been confined to a few cities--but I fear for the future.

Posted by Sheldon Richman at 6:17 AM