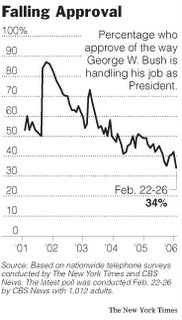 Whatever one thinks of Dubai Ports World acquiring leases to manage terminals at U.S. ports, there is one bright spot: People don't believe George II. He's basically asked for trust in his judgment on the deal, but today's New York Times shows he's not getting it: "Seventy percent, including 58 percent of Republicans, said Dubai Ports World, a company controlled by the emir of Dubai, should not be permitted to operate at United States ports, while 21 percent supported the arrangement." Bush's job-approval rating has fallen to 34 percent, and the percentage saying Iraq is going badly has increased from 54 to 62.

Given a world of government-owned ports and government-owned companies, I don't see a problem with DP World's acquiring the leases. But it's nice to see the people expressing their distrust for a president who has systematically misled them.

Posted by Sheldon Richman at 5:06 PM